If you’re ever looking for a fancy tu tu have no fear, the Guyana Flag Tu Tu is here! I found these on Etsy Marketplace and thought that it was quite crafty of the designer.

A tutu is a skirt worn as a costume in a ballet performance, often with attached bodice. It consists of a Basque (or waistband, it can either be part of the bodice or a separate band) and the skirt itself might be single layer, hanging down, or multiple layers starched and jutting out. The bell-shaped Romantic dress of the mid-1800s gave way to the tutu at the end of the 19th century.

The word ‘tutu’ has its origins in the theatre audience. Those who bought cheaper tickets sat in a section located in the lower part of the theatre. This area gave the patrons sitting there a different view than the rest of the audience; they could often see under the ballerinas’ skirts and see their bottoms. This led to a lot of talk and eventually, the French baby talk word for this part of the ballerina, “cucu,” became “tutu.”  There you have it!  Pick up your tu tu on Esty at http://www.etsy.com/listing/105973965/guyana-flag-number-2-tutu 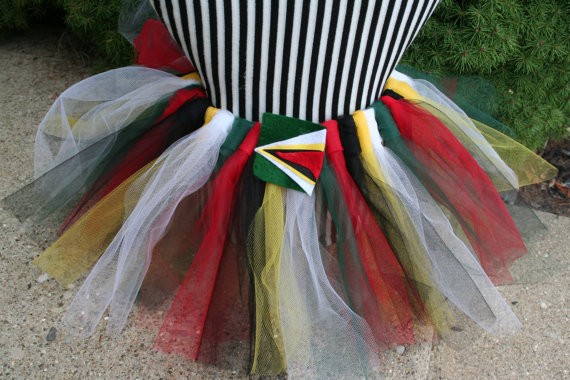