The four young women are donned military uniforms of green khaki on January 30, 1967 and marched smartly off to begin a course of training as officers in the Guyana Defence Force (GDF) Army.

The four female officers were first taken on a tour of GDF headquarters, Thomas Lands and met with Chief of Staff, Colonel R. J. Pope and other officers. 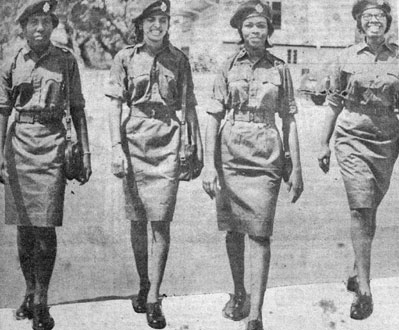 Below are the first batch of women soldiers, before leaving the GDF headquarters where they were fitted out with green skirts and shirts, were addressed by Lieutenant Richard Fraser. The women soldiers did drilling, weapon training, cooking, clerical duties, and drove and serviced vehicles. (Winston Oudkerk photo). 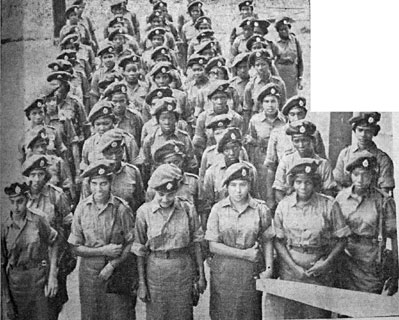 Below are the first all female guard-of-honour at the then Timehri International Airport during the visit of Prime Minister Prime Minister Sirimavo Bandaranaike to Guyana in 1975.

It was also a significant event for women as that year was designated International Women’s Year.  Officer in charge of the parade was Major Brenda Aaron and the colour party comprised Lt Cheryl Pickering, colour ensign, Sgt Lorraine Solomon and Cpls Lynette Smith and Marva Nedd’. (Photo, courtesy of Pilot Cheryl-Pickering-Moore) 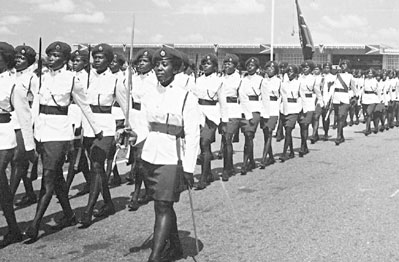 Seven soldiers who were in the Women’s Army Corps from its inception, from left, Sergeant Skerett; Sergeant Wood; Staff Sergeant Sinclair; Staff Sergeant Croft; Warrant Officer 11, Duncan; Warrant Officer 11, Arthur and Major Aaron, pose during the 20th Anniversary of the WAC, February 1987. They all received gold ring from wife of then Chief of Staff, Major General, Norman Mc Lean on the occasion. ( Chronicle file/Winston Oudkerk photo)

Cheryl Pickering-Moore, the first female helicopter pilot in the Guyana Defence Force with another of her colleagues Beverly Drakes in one of the GDF helicopters. Pickering and Drakes both received training at Embry Riddle Aeronautical University (ERAU) in Daytona Beach, Florida, U.S.A (Photo courtesy of Cheryl Pickering-Moore). 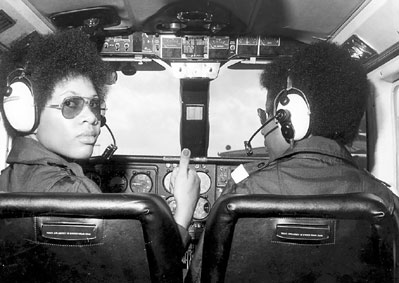