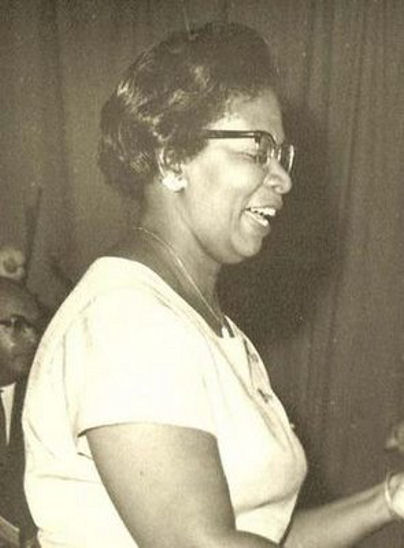 Ms. Valerie Rodway (1919-1970) was a teacher and Guyanese composer.  She is best known for her national songs, which include, “O Beautiful Guyana,” “Kanaïma,” “Hymn for Guyana’s Children,” “Arise, Guyana,” and “Guyana the Free.  She also put to music the famed Guyanese independence poem by Martin Carter, “Let Freedom Awaken.”

Ms. Rodway was a member of one of those families whose contributions to Guyana are still evident. Her father, Newton Berthier Fraser was born in Essequibo into a family of sailors, who for almost four generations owned and operated sloops and schooners. His grandfather, father, and brothers were international mariners. Newton Berthier Fraser was also known as ‘Capo’ in recognition of the fact that this master mariner was the owner and captain of many sloops and schooners. The sloops moved sugar from Davson’s Berbice estates to Georgetown. The schooners were pivotal in inter-Caribbean trading during the early to mid-20th century. Schooners, especially those on the British Guiana to Barbados route, took rice, ground provisions, and in some cases passengers, to Barbados. On the return leg, they would bring white marl – the foundation for most of our streets in Georgetown.

Valerie Rodway’s mother, Jane Elizabeth (nee Fraser), was born in Corentyne, Berbice. Her ancestors can be traced back to Parris Britton, a Barbadian immigrant who came to Berbice circa 1816, just after the colonies of Berbice and Demerara were finally ceded to the British by the Dutch. He was a leather worker – the maker of saddles, harnesses, stirrups, and other accoutrement required for the horses and mules that dominated the transportation system of sugar estates in British Guiana. He became a successful proprietor of estates, livery stables, a race course and the first owner of the Strand Hotel in New Amsterdam.

His landholdings, which remained in the family, would provide support for Berthier, Jane and their family during the hard times they experienced during the economic depression of the 1920s-1930s. Their challenges were compounded by the devastating hurricanes that roared across the Caribbean during the 1930s, destroying craft owned by Berthier Fraser. He did not despair.

Valerie Rodway was born in New Amsterdam in 1919. She was the fourth daughter and the fifth of eight children. Her siblings were Hyacinth Godette, May Cholmondeley, Burchell Fraser, Lucille Wharton, Aubrey Fraser, Vil Fraser, and Dr Ovid Fraser.

The first inkling that Valerie was gifted musically took place when the family sojourned in Barbados. According to her sister Lucille Wharton, Valerie, then a toddler, would wander away from the family’s home and visit a neighbour to “tinkle the keys” of the piano. When that was not possible, Valerie would create a make-believe piano from the Venetian blinds in the family’s home and hum to her own compositions.

In time, Valerie would become one of Guyana’s celebrated composers of patriotic and classical music. She was trained by the leading music teachers of her time – Winifred McDavid, Ruby McGregor, Edna Jordan, and Eleanor Kerry. She would earn the Licentiate of the Royal College of Music (LRCM). In 1978, eight years after her death, twenty-three of her compositions were published under the title National Songs Composed by Valerie Rodway. The collection included twenty songs, and three classical pieces.

Arthur Seymour has noted that the majority of Valerie Rodway’s compositions were done during the 1960s. Several reasons have been offered for this productivity. Among them was her marriage to James Alwyn Rodway in 1958. This marriage, her second, was described as a very supportive one. J A Rodway “thought a lot about her musicianship” and was very supportive of it. Together they wrote the lyrics and the music for Guyana the Free. Other reasons too have been suggested for this creativity. Central to this was the ferment taking place in the Guyanese musical environment. The 1960s was the period when Guyana was actively preparing for independence and music was given a special role in this.

This reality was evident in the music curriculum of the public school system. The curriculm shifted from British colonial content and began to demand more Guyanese content. By the 1960s, the British Guiana Music Festival, which was launched in 1952, also demanded Guyanese compositions as test pieces. By the mid-1960s, as independence approached, there were competitions for the national anthem. Valerie Rodway responded to all of these challenges and opportunities. A central personality in this shift in musical focus was Lynette Dolphin. Some time after the death of Clarice de Weever Dolphin, (Lynette’s mother) in 1936, the Dolphin sisters moved into the Fraser household, and a lasting friendship was developed between Valerie and Lynette.

A review of Valerie’s works shows that she composed patriotic music, music for the school curriculum, music for test pieces for the music festivals, music for community singing, music for large choirs and art music. She also entered a composition for the national anthem.

Several of her compositions were to the poems of some of Guyana’s best – Carter, Chinapen, Daly, Harper Smith, Ramcharitar-Lalla, Seymour, and Wishart. Her music gave their words a special transcendental majesty. A close examination of the songs indicates that she selected poems that encouraged and nurtured a set of positive values – service to the nation, respect for the heritage, the creation of a just and caring society – essential values for the new multi-racial nation. In addition, her compositions also celebrated Guyana’s hinterland – the rivers, the waterfalls, the flora, the fauna and our first peoples.

Consider the Hymn for Guyana’s Children (words by Vere T Daly), the favourite composition of her niece Cicely Gouveia; it requires Guyanese to “strive to build/a new Guyana great and free/A land of glory and of hope/A land of love and unity.”

Guyana the Free (words by James and Valerie Rodway) speaks to the fact that Guyana “has broken the bondage of distant powers” and the need to “make here a paradise, land of our birth.” In Arise, Guyana (words by J W Chinapen), the Guyanese nation is called upon to “Guard well our sacred heritage/That it may thrive from age to age/Guyana, Blessed Guyana, be/Proud of your glorious destiny.”

A Hymn for the Republic (words by Nellie Wishart) celebrates the pride associated with becoming a republic: “With pride we now lift up our heads/And sing it out to all the world./Come shout with joy, our hearts are fed/Guyana’s flag is now unfurled.”

The ever popular and moving O Beautiful Guyana (lyrics by Walter MacA Lawrence) touches a responsive chord whenever we hear “O Beautiful Guyana, O my lovely native land, More dear to me than all the world.”

Valerie Rodway also put composed music for Martin Carter’s Let Freedom Wake Him. The poem is a call to action and a statement of solidarity “Give me your hand Comrade! Do not cry little one do not cry. This is the bond we made in the dark gloom about us, Hand in Hand, Heart in heart, strength in strength.” The music she composed for Let Freedom Wake Him demonstrated that her style was not limited to British musical idioms. In this piece we feel the syncopation and hear blues motifs – normally associated with the music of African Americans. This is important given the African American struggle that was coterminous with Guyana’s anti-colonial struggle.

Her brother Ovid pointed out that Valerie was an accomplished jazz pianist and enjoyed jam sessions with Robert Frank and Iggy Quail.

She also connected us with Guyana’s landscape. She took us in to the hinterland, up rivers, and down waterfalls with Make music children, River Idyll, There Runs a Dream, and Water Music (words by A J Seymour). She also connected us with our Amerindian heritage with Kaieteur (words by J A Lawrence) and Kanaima, a composition for solo piano which captures the hunt and drama associated with this fearful form of retribution.

Valerie Rodway reflected upon the nation’s soundscape. In The Weeding Gang (words by CEJ Ramcharitar-Lalla) she captures the onomatopoeia of the weeding gang returning home from work. We “hear their saucepans jingling and their cutlasses a tingling.”

Once upon a time, there were trains in Guyana and one of the famous East Coast trains was ‘Sir Graeme.’ Her composition Sir Graeme: East Coast Train captures the sound of that era.

Valerie Rodway’s body of work is expansive in scope. It reflects genre diversity, national pride, and commitment to quality.

Although she had no children of her own, she was the stepmother to the Rodway children. Her stepdaughter, Dr Cicely Rodway, remembers her as “a kind and gentle woman… [who] was an excellent mother…”

Her relatives think of her as a generous woman who never complained and as someone who was passionate lover of Guyana. For them, she was able to take the rough patches in her life with quiet dignity. In the process, she exemplified the values of the Fraser family – tenacity, couth, caring for the arts, respect for all people, and service to the nation.

Guyana awarded her one of the nation’s high honours – the Cacique Crown of Honour, and in 2002 the Guyana Folk Festival Committee bestowed upon her a Wordsworth McAndrew Award for her unselfish service to the development of Guyanese culture.

So, every time we sing one of Valerie’s songs, hear some of her music, let us remember that she knew pain and hard times but held firm to humane values. Let us keep them alive.