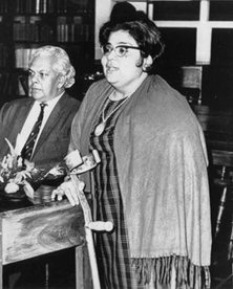 Rajkumari Singh, A.A. (1923-1979), stands out as a major pioneering Caribbean woman writer, political activist, educator and distinguished cultural leader in her native land, Guyana, where she received national honors. She was respected and praised by her contemporaries for the quality of controversy, criticism and debate present in her works, for which she received many literary prizes and awards; she is revered by numerous younger poets, writers, scholars, artists and performers, to whom she was a patron and mentor. Rajkumari was concerned with Indo-Caribbean identity finding their place in a region undergoing harsh and disappointing political, cultural and social change. These critical issues found their way into her literary work. Rajkumari’s legacy continues to inspire new generations in the Caribbean and in countries of the Indian Diaspora.