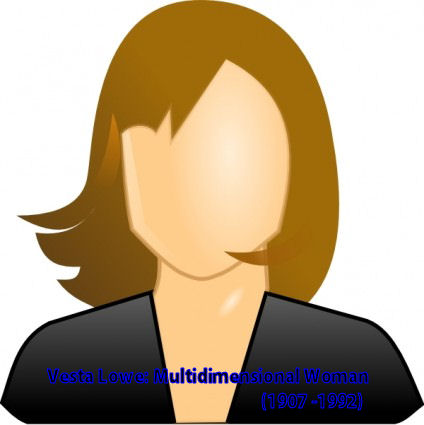 Vesta Lowe (1907 -1992) was a multidimensional woman-teacher, singer, musician, folk song collector, and rural development professional. She was a pioneer in so many aspects of life. She was among the first batch of teachers to graduate from the Teachers’ Training College. She is considered to be the first Black woman to graduate from Tuskegee Institute with a B.Sc. (Honours) degree in Home Economics. Lynette Dolphin described Vesta Lowe as “the pioneer in the field of Folk Song preservation” in Guyana as she “collected the music from various rural districts and the hinterland and popularised it in choral form at concerts presented by the Dawson Music Lovers Club and the Vesta Lowe Choir.” Her publication Guiana Sings and the accompanying LP record were published by the Cooperative Recreation Service, Inc., in Delaware, Ohio, in 1959. The publication and accompanying LP were used across the United States in music education programmes.

Vesta Lowe grew up in a home that was permeated with music. Music was a family tradition: “her mother and father were both staunch members of church choirs.” Vesta also sang in Sunday school and church choirs. Her musical education continued at the Teachers’ Training College where she studied under Rev. Hawley Bryant, who composed the music for “Song of Guiana’s Children.”

Like the late Dr. Ptolomey Reid, Vesta Lowe was a graduate of Tuskegee Institute. She attended the institution during the 1930s through a scholarship that was provided by British Guiana’s Negro Progress Convention. While at Tuskegee Institute, she continued her music education and training. Among her tutors were Mr. William L. Dawson and Mrs. Portia Washington Pitman. Mr. Dawson was the Institute’s choir conductor, and Mrs. Pitman, the daughter of Booker T. Washington, the founder of the Institute, was the assistant conductor and piano tutor. Vesta Lowe was a soprano in the Institute’s first choir during her stay at Tuskegee. Among her most prized memories of her stay in the United States was being part of the Tuskegee choir that sang at the opening of Radio City in 1932.

On her return to British Guiana, she proceeded to “give back to her community” in the spirit of the Negro Progress Convention and the Tuskegee Institute. Among her indelible contributions was the founding of the Dawson Music Lovers’ Society-named after her college professor-in 1939. She served as the conductor. The training she provided members of the Dawson Music Lovers’ Society made them attractive to other choirs such as the Maranatha Male Voice Choir. Members such as James Pheonix and John “Bagpipe” Fredericks would go on to become leaders in the British Guiana Police Male Voice Choir. James Pheonix later formed the Skeldon Music Lovers Society. Because of this dynamic, Vesta Lowe influenced musical education and appreciation across Guyana. Her repertoire in the early period included “Negro spirituals and Irish songs.”

By 1944, she created the Vesta Lowe Choir with the declared aim of making music accessible. John Fredericks remembers her as a demanding leader and a stickler for punctuality. He tells the story of a leading male singer who was sent home because he showed up in a grey suit when the required code was a dark suit. Among her efforts at making music accessible was organising concerts at the Town Hall and moonlight singing on the Sea Wall. According to “Women of Talent,” “In 1947, Mrs. [Lowe]-Prescod broke new ground, and presented a programme of Guyanese Folk Songs, in which the Qweh-Qweh Dancing accompanied by African Tom-Toms was a novel feature.” The rest is history. That concert contributed to the breaking down of the stigma associated with Guyana folk songs created by formerly enslaved Africans in British Guiana and gave Guyana a musical tradition of which all could be proud.

In addition to contributing to the development of music in Guyana, Vesta Lowe had a proud public service career in education, health, and nutrition. She served as Dietician at the Public Hospital in Georgetown and as Supervising Dietician of the Children’s Breakfast Center. She taught at the Carnegie School of Home Economics. She was also a member of the B.G. Branch of the British Red Cross Society and served as a Vice President of the Teachers’ Training College Old Students’ Association. She was also a foundation member of the Kitty Women’s Institute and served as its president.

According to one of her relatives, Vesta Lowe “spent most of her time working with the Ministry of Agriculture. While there, she was very involved with 4-H clubs from New Amsterdam to Crabwood Creek and Black Bush Polder. She also organised a lot of community clubs and projects in the Manchester/Liverpool/Lancaster area, some of which met in her home at Manchester.” Those who knew Vesta Lowe have commented on her unselfishness and her use of personal and other resources to enhance the lives of others.

As Lynette Dolphin confirmed, Vesta Lowe was a pioneer in the preservation of Guyanese folk songs. About 15 years ago, one of my colleagues at Ohio University gave me the LP Guiana Sings that was used by his mother when she taught school in rural Ohio. This is one of the most treasured items in my Guyana collection. On that album we have recorded for posterity the voice of Rev. Fred Talbot. The LP also features the voice of a young Rafiq Khan, then Programme Director of the British Guiana United Broadcasting Company, providing descriptions of the 13 folk songs on the LP -”Col’ A-ready,” “Cuma Fish,” “Daddy Gone” “Gol Ring,” “Goo’-night, Aye,” “Itaname,” “Marijanna,” “O Gal, Ah Too love,” “Rainy Wedder”, “Sancha,” “Sugi Mugi,” “Sun Ah Go Down”, “Supinam Water,” “T’ing Na regula,” “Train Song,” “When Me Go,” and “Yalla Gal.”

I was recently able to get a copy of the book that accompanied the LP from John Fredericks. The book contains the lyrics and music for 21 Guyanese folk songs. Vesta Lowe’s work is very important and she must be accorded the respect that has been accorded to the world’s great song catchers like Jesse Fewkes, Bella Bartok, Edvard Grieg, Percy Grainger, and Alice Fletcher whose collections of the songs of ordinary people have helped people around the world to appreciate their cultural heritage and have influenced other genres of music.

The aim of these features is to go beyond descriptions of individual contributions. These features call upon us to appreciate context and identify next steps in important tasks of preserving, propagating and promoting Guyana’s cultural heritage. Vesta Lowe studied in the United States during the Jim Crow era and returned to British Guiana to continue experiencing discrimination. Despite her education, training, and qualifications, she was never able to obtain a tenured position in the British Guiana civil service. According to her relatives, she held a number of “open-vote” appointments. Despite these professional slights she continued to serve her country. She soared above the vulgarity of her times and left for us a body of work that makes us proud to be Guyanese. Vesta Lowe was a 2003 Wordsworth MacAndrew Awardee.