Amber Low a is 22-year-old commercial pilot with Roraima Airways and the youngest female pilot in Guyana.  She is the daughter of renowned Gynaecologist, Dr Guy Low.  Amber initially wanted to be a medical doctor like her father but instead she became a flight attendant, a decision which later fueled her desire to learn her how to fly a plane and become a pilot.  Here are a few excerpts from Amber’s interview with the Guyana Chronicle….

“After travelling the world a little with Dynamic and seeing little pieces of it, I decided I didn’t want to be flown anymore — I wanted to learn how to fly this thing!” 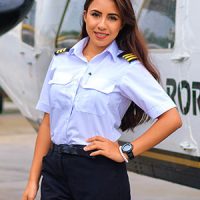 “Sometimes in life you think you now have your own path and it’s just set for you and then it just kinda steers you in an entirely different direction. It found me I didn’t find aviation. It really did find me.”

“It’s exciting! Every day is definitely a new adventure! I always like to be in control… it’s really important to see what it’s like behind the scenes. Before you get your wings, what is the process? Most pilots, you’re flying you know what you’re doing, but you don’t know what the engineers or the flight attendants are going through. You don’t know that life. But for me it was very important to have it well-rounded. So being flown it was a calmer experience.”

“Flying, on the other hand, you’re in control of your life and everyone else on board – every single other person. There’s so much going on at once – calculations, radios, you have to know that ‘I’m at this spot in the world, in the air.’ There’s nothing to tell me where I am except maybe a computer or like these coordinates that you made yourself. You’re in control of everything and all at once… It’s exciting and it takes a really strong person.”

Congratulations on your achievements Amber, You Rock!  For more on this story, follow the link below .

From flight attendant to commercial pilot

“After travelling the world a little with Dynamic and seeing little pieces of it, I decided I didn’t want to be flown anymore – I wanted to learn how to fly this thing!” In looking at a video documentary of an eagle’s flight, the question was asked: “Why does the thrill of soaring begin with the fear of falling?”