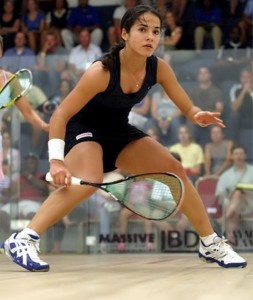 Caribbean Squash Queen Nicolette Fernandes was born  in Toronto, Canada on June 19, 1983.  She moved back to Guyana with her parents at an early age began playing squash competitively at the age of 8.   Representing Guyana, she dominated the junior category both domestically and regionally before she became famous for her outstanding performance at various Caribbean Championships.  Nicolette made a significant leap when she was just 19-years-old and emerged as Champion at her first Pan American Games. Nicolette has competed for Guyana throughout her career but has also been playing professionally in England over the past 11 years, where she currently resides. 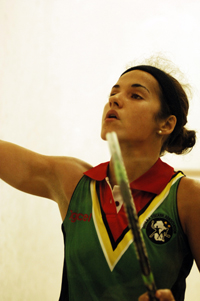 At age 29, Nicolette has already received many titles and has secured herself a spot on the world stage of outstanding sport personalities. She won the only Gold Medal for Guyana at the 2006 Central American and Caribbean Games.  In May 2007, Nicolette was ranked No. 27 in the world for professional women’s squash.  In February 2010, Nicolette was named Guyanese Sportswoman of the Year for 2009 by the Guyana National Sports Commission. She also gained the prestigious recognition for winning Guyana’s only gold medal at the Central America and Caribbean Games in Colombo. 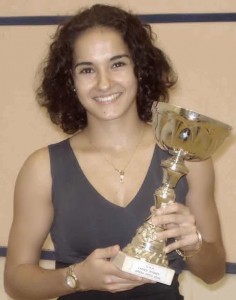 Nicolette sustained a career threatening knee injury that sidelined her for two years, at the end of which Nicolette had to start all over again with a ranking of 249. With the extreme determination that has become her trademark over the years she overcame the challenge.  In August 2012, Nicolette topped  her competitors in Trinidad and Tobago by claiming the female individual title fairly easily in the senior Caribbean Squash Championships!

Nicolette’s siblings also represented Guyana in different sport (Hockey), and she is very thankful for their support. Her brother Robby has been an excellent mid-field player while her younger sister Tricia is a fine defender on the hockey field.“It is always wonderful to know that your brother and sister are playing competitive sport for your country and making a good impression too,” the Squash player said. She added, “they are encouraging me to play my game seriously at all time and since I recovered from my injury, they have also been supportive in all aspects.”