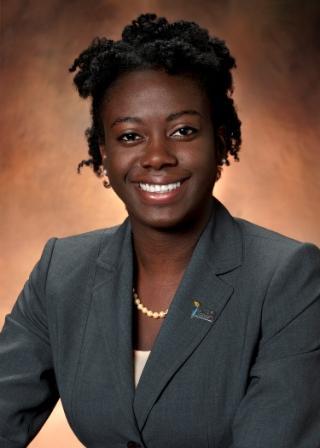 Dara Bobb-Semple has many accomplishments at Stony Brook – from twice being recognized for achieving a 4.0 GPA, to receiving the MARC award in fall 2011, to being elected to Tau Beta Pi Honor Society (December 2011), to recently being named a recipient of a national award, the 2012 UNCF Merck Undergraduate Science Fellowship! But looking back, the path has not always been straightforward or easy: “Five years ago, I would have never dreamed of doing what I’m doing now. Getting involved in the Wong group has been a great opportunity for me. It’s given me a lot of experience and has opened the way for me to become involved in many other things. My MARC fellowship is partly due to my research. I also believe that the skills and experience I acquired in the Wong group gave me an edge toward the Merck scholarship.”

As an 11-year old, Dara Bobb-Semple remembers deciding that she wanted to be a scientist—in part influenced by a Scholastic Biography of George Washington Carver. As a high school student, she remembers being captivated by the study of chemistry: “…it was one of the subjects that I had to work the hardest at in high school. I just gravitated towards it early on, and I grew to love it and understand it better than most other subjects.”  But her goal of pursuing science as a career/profession seemed more than remote in the years following high school when Dara took a job as a bank teller to help support her family. After a few years in banking, Dara decided to re-direct her focus back to her love of chemistry, and set out north by northwest from her home in Georgetown, Guyana (South America), to arrive at Stony Brook in spring 2010, motivated to pursue her studies of in the field of chemical engineering. Looking back on that time period, Dara reflects: “… the time I spent in that job helped me to clarify my goals, and to realize exactly what it is I wanted to do. When I arrived at Stony Brook, I had a clear goal and I was more driven towards it.”

To help support herself, Dara worked as a lab assistant (10 hrs/week) in the Furie Laboratory at the Center for Molecular Medicine from her first semester here onward. When she took the initiative to get involved in Chemistry research in sophomore year, she contacted Dr. Stanislaus Wong of Chemistry and counts herself fortunate to get an opportunity that she acknowledges changed her life. For over a year now, Dara has been working in the Wong lab together with her graduate student mentor, Chris Koenigsmann, preparing crystalline metallic ruthenium (Ru) nanowires and getting invaluable training in the nanotechnology field, including exposure to physical characterization methods such as transmission electron microscopy (TEM) and powder X-ray diffraction (XRD). Currently she is at work on developing a more optimized, reliable synthesis for high-quality Ru nanowires, with control over their size and morphology. On April 25 (Student Activities Center, Ballroom A), be sure to talk Dara at the URECA campus-wide symposium!

Dara’s research was supported in summer 2011 through AGEP-Summer Research Institute, a summer program hosted by the Center for Inclusive Education (CIE). Following the advice of her LSAMP mentor Paul Siegel, Dara subsequently applied for and received a MARC fellowship from the Center for Science and Mathematics Education (2011-2012) which has allowed her to dedicate more time to research/scholarship. This past February, Dara was awarded the UNCF-MERCK Undergraduate Science fellowship, a nationally competitive award which will provide additional internship opportunities at Merck for upcoming summer(s).

In her spare time, Dara enjoys singing, dancing, badminton and reading. She is the corresponding secretary of the Stony Brook Gospel Choir and the secretary of the Essence of Praise dance group. She is also an active member of Collegiate Science & Technology Entry Program (CStep) and Louis Stokes Alliance for Minority Participation (LSAMP); as well as the American Institute for Chemical Engineers. Dara speaks appreciatively of all her SB mentors and advisors, including: Dr. Dan Moloney of CESAME; Kathryne Piazzola and Nina Maung of the CIE; Paul Siegel of Technology & Society; Christine Veloso of CSTEP; Dr. Devinder Mahajan and Dr. Miriam Rafailovich of CME; and Chris Koenigsmann and Dr. Wong of Chemistry! Dara also credits her mother and grandmother as motivating forces in her life, and fondly remembers her grandmother’s recitations of the poet Longfellow as she extolled the merits of hard work and dedication: “The heights by great men reached and kept, were not obtained by sudden flight. But they while their companions slept, were toiling upward in the night.”

Update:  Dara graduate from Stony Brook University in December 2013, and will be working at Brookhaven National Laboratory and applying for PhD programs in Chemistry.