CEO Michelle Foster of KISRA (Kanawha Institute for Social Research and Action) gives a thumbs up for her pet project, an urban farm across from KISRA’s Dunbar headquarters. The huge garden with two greenhouses trains clients in farming skills and markets the locally grown produce. A Guyana native, Michelle was a chemical engineer at Carbide in West Virginia as before opting to run the highly successful KISRA nonprofit program.

Born and raised in Guyana, Michelle immigrated to New York as a teenager and envisioned a lifelong career in chemical engineering. A chemical engineering post at Carbide took her to Charleston, Virginia where she discovered the Ferguson Baptist Church in Dunbar. In 1993, through the church, she started a youth program that opened her eyes to other problems — hunger, debt, jobs, housing and especially ex-inmates needing a jumpstart on restarting their lives. Today, she’s another kind of engineer. Social engineering, she calls it. She’s CEO of KISRA (Kanawha Institute for Social Research and Action), a wildly successful faith-based nonprofit that provides day care, employment and housing help, family planning, counseling and all sorts of other resources aimed at bettering borderline lives. 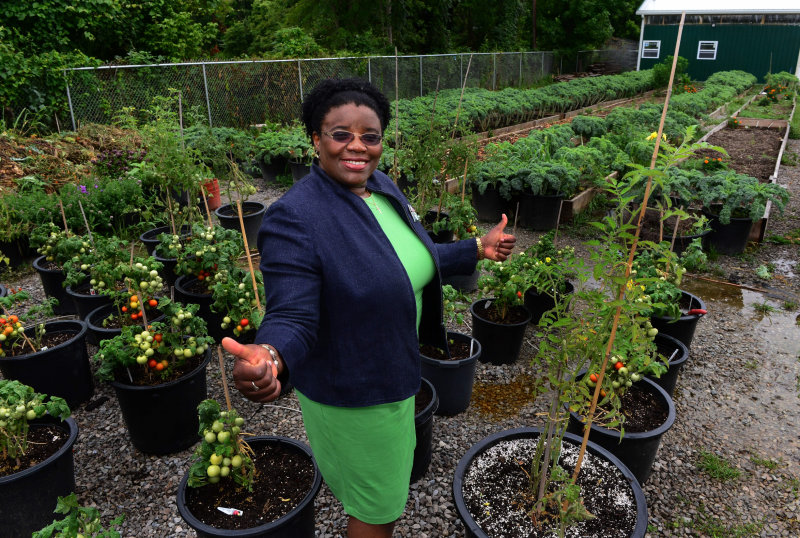 It started modestly in the basement of the church and mushroomed into one of the largest programs of its kind in the state. In 2008, KISRA moved into a large, renovated building on Perkins Avenue, in Dunbar. No one is more amazed at KISRA’s success than the woman in charge. But then, she has a perfectly acceptable explanation. It’s God’s work, she says.  Here is Michelle’s personal story from a 2104 interview with The Charleston Gazette.

“I was born in Guyana, in South America, the oldest child of three. I have a brother and sister. My dad was an accountant and mom was an educator. There was a lot of poverty, but we never knew it. My parents were great role models. They worked hard and valued education. They were always learning. There were periods when we lived with our grandparents because my parents were always going to university.

“We left Guyana when I was 17 and moved to Brooklyn. It was exciting. We’d heard great stories about America, where you got what you wanted. Almost heaven.

“My mom’s sisters had immigrated. They were nurses recruited by hospitals to work in Brooklyn. They sponsored my mom. We came for a better way of life.

“It wasn’t a bed of roses. Guyana was a tropical country, so we were coming into the cold. We came in April, 1984, so the weather was fairly mild. There was a lot of adjusting, just getting around in New York.

“I am very thankful for the support I received from my aunts. We lived with them until my parents were able to buy a home. I saw them starting from scratch with their careers and never complaining. They made a whole new life for us.

“I wasn’t sure what I wanted to be. I knew I liked math and science. I signed up at City University of New York. One of my friends said, ‘Oh, Michelle, you are so good at calculus and chemistry, why don’t you be a chemical engineer?’ I looked it up and thought it sounded nice. I switched to a school with a chemical engineer program.

“I graduated in 1990. I had a job offer with BP Research in Cleveland. My friends thought I was crazy for leaving New York for Cleveland. They thought I was going to the boonies, but I was brave and went forward.

“I was at BP about two and a half years. Then they were downsizing and offering very lucrative packages, and I took one. Carbide recruited me, and that’s what brought me to West Virginia in ‘93.

“It was a positive change. When I was leaving Cleveland, one of my friends said, ‘When you go to West Virginia, just look for a church and you will be fine.’ I found the Ferguson Memorial Baptist Church.

“At Carbide, when a new employee came in, they put up a bio and a photo around the buildings and people would come by and welcome you. Someone who welcomed me told me about the church and that the pastor was from Guyana. That sounded interesting.

“That changed the direction of my life. I was just coming here to be an engineer. I started volunteering at church. I led vacation Bible school and it kind of evolved. I brought a new youth program to the church, called Pioneer Club. There was  a need for a structured youth program. There were hundreds of kids in the building. 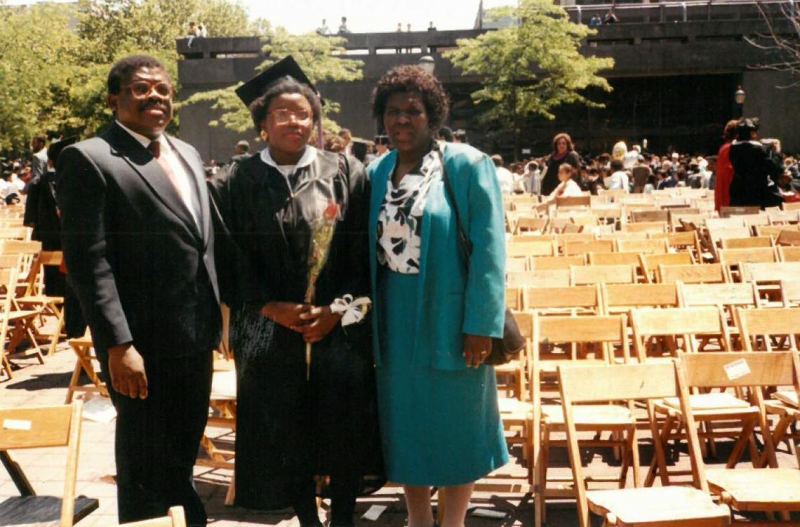 In 1990, Michelle Foster celebrated her graduation from City College of New York in Brooklyn with her parents, Winston and Muline Mickle. She received a bachelor’s degree in chemical engineering.

“We realized a number of the kids were having trouble reading the Bible verses and we started a literacy program. Pastor (Emmanuel) Heyliger mentioned that a couple had done the nonprofit paperwork for KISRA but had moved on.

“It was to be an organization to raise funds to do the work we were trying to do. I’d had no experience with nonprofits. It wasn’t in my world at all. I got a grant application in the mail and I applied for it. I didn’t know what I was doing. I didn’t get the grant. But this lady, Helena Lee, called me in and went through the application with me and explained what each system meant.

“She said there was a planning grant coming up for a smaller amount. She suggested I apply just to learn the process. I got that grant and built and built on that. I learned as I went along.

“We started out in the basement of the church in classrooms used for Sunday School. We started an after-school program.  Pastor Heyliger said we needed to do more to help our kids. It evolved.

“We realized how many needs the kids were facing. They were hungry. We started serving snacks. They were faced with so many pathologies in the home. A number were from single family homes, so we started doing more to help people repair their credit and buy homes. We had to work beyond the kids to the extended family. It evolved to workforce development programs and programs for people wanting to buy homes.

“In 2006, we had started a Responsible Father program to work with noncustodial dads. As many as 60 percent of the kids we were serving were from female heads of households. And 60-plus percent of the guys we were reaching had a criminal background. We had to go a little deeper. We established a partnership with the Division of Corrections and started working in prisons with people on the way out to get them acclimated and give them skills and access to resources with the hope that they don’t return. That saves our state $25,000 plus. So it’s an economic issue, reducing the flow in and out of prison.

“Our work with parents and fathers had taken us to 20-plus counties. A couple of our programs are statewide, like our microloan program where we can lend new and existing businesses up to $50,000. We also have a statewide matched savings program, our individual development account program where someone within a certain income bracket can save toward a home a business or an education and can get that savings matched up to $8 for $1 saved.

“We have family planning, behavioral health and after-school programs only in Kanawha County.

“The farm is across the street. That is only here in Dunbar, but we are looking to replicate. That came out of our Fatherhood Responsibility program. A number of fathers have backgrounds that prevent them from getting employment. We wanted to create a social enterprise where we can hire ourselves. We used some of our funding to set up an urban farm that has two greenhouses and outdoor lots. It includes farm skills and culinary training. We teach participants how to grow and hire them to work on the farm.

“They can stay with us or move on to other employers. We sell the plants we grow and put proceeds back to the farm. We have a catering service for someone who wants quality catering with locally grown foods. We also have a food truck. We go to Live on the Levee and to some employers. We started a Wellness Wednesday at CASCI.

“It’s all about creating jobs for people who need a helping hand. A lot of these guys want to work but just need a hand up as opposed to a handout.

“There is such a demand for locally grown foods. We are serving customers in Huntington and Parkersburg. We are looking at replicating the farm in Beckley. We’re working on a food hub where we can work with other farmers and create a larger volume of produce to serve more people.

“I’m amazed at what God has done. None of us envisioned the KISRA dream evolving into what it has become. I believe the half has not yet been told. There is still so much more.

“There is such a demand for locally grown foods. We are serving customers in Huntington and Parkersburg. We are looking at replicating the farm in Beckley. We working on a food hub where we can work with other farmers and create a larger volume of produce to serve more people.

“Chemical engineering seems so long ago. I never looked back. When I first started, the church paid me a salary to develop KISRA, so I had a decrease of salary, of course. I never missed a meal or a mortgage. I went through a divorce at that time. While I was married, I was putting up with a lot because I had a fear of being alone. But God was able to take care of me in going through this change of career, so why wouldn’t He give me the strength I needed to get out of a bad situation?

“The funny thing now is, we are converting our greenhouses to hydroponic, so it’s like I’m going back. I’m  going to take training to learn how to operate the system hydroponically, so I feel I am going back to engineering in a strange kind of way. I guess you’d say I’m a social engineer.

“This building opened in 2008. We thought we had all this room, and we moved in and ran out of space. We have a house we rent in Charleston and have offices in Parkersburg, Winfield and Huntington, Beckley and Princeton.

“I’m in a good place. I’m working on getting some balance in my life. I make sure I schedule time off so I can do things with my family. Most of my family is in New York, so I’m traveling a lot more.

“I’m thankful to for the great team I have. They make coming to work a joy. I’m living the American Dream, realizing that there is no limit. No one should put limits on themselves.”