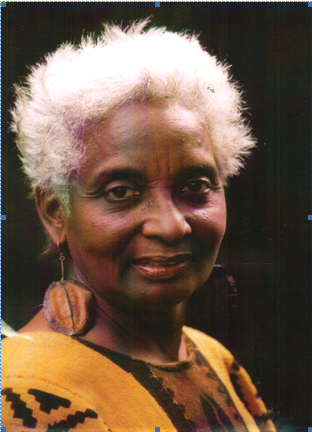 JEAN SMALL is a Guyanese Jamaican living in Jamaica since 1954. She graduated from the University of the West Indies in Foreign Languages,–French, Spanish and Latin and her profession all her life has been as an educator. She has worked in Guyana, Trinidad, Nigeria, Australia and here in Jamaica as a teacher of French at both Secondary and University levels. Her love since school days has been theatre and she now considers herself first an actress and secondly director and playwright using theatre tools as a vehicle for understanding life, language, culture and interpersonal relationships. As a Foreign Language lecturer, she uses theatre to teach French Language and Literature at the University level. Her publications include a series of textbooks in French and Spanish for schools, a play A BLACK WOMAN’S TALE and articles on the empowerment of theatre.

Dr. Small has participated in theatre internationally and is the only person in Jamaica who uses theatre as a tool for teaching French Language and Literature. For thirteen years Dr. Small led a team of experts from across the Caribbean to formulate the curriculum in French and Spanish for the CARIBBEAN EXAMINATIONS COUNCIL (CXC) and she participated in writing the syllabus for Theatre Arts for the CXC. She was the External Examiner for Theatre at the Edna Manley College and External Examiner of French for the Joint Board of Teacher Education from 1993 to 2010.

She has been decorated twice by the French Government for distinguished teaching of French language and Literature. First in 1985 with the Academic Palms at the level of Chevalier and in June 2004 at the Level of Officier. Dr. Small is presently retired from the University of the West Indies where she last headed the Philip Sherlock Centre For the Creative Arts. She is currently the Convenor of the Fine Arts Board of the University Council of Jamaica , member of the Alliance Française and Past President of the Jamaica Association of French Teachers. In 2001 Dr. Small was inducted into the CARIBBEAN HALL OF FAME in Jamaica. 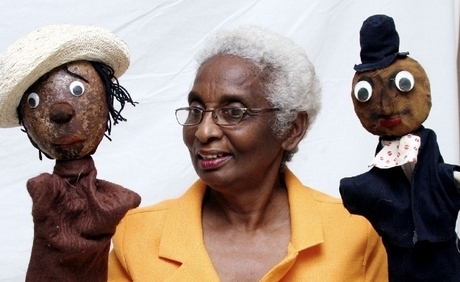 Jean Small manipulates two puppets during a Portmore puppet show at the Lions’ Civic Centre during Portmore Week activities in 2008. – photo by Anthony

In 2006 Dr. Small won the Evaluation contest at the Area Level and in 2007 she became the Caribbean Champion of Public Speaking. . Her other awards include the ACTOR BOY AWARD in 1995 for her performance in HOT FLASHES, the Charlotte and Isidor Paiewonsky Prize for the Best first publication of LAMENT a poem dedicated to Prof. Kamau Brathwaite in the Caribbean Writer ,a publication of the University of the Virgin Islands and the choice of her play THE BLACK WOMAN’S TALE as the best Jamaican play in 1998 which she performed in France in French at the Theatre Gérard Phillipe. Dr. Small also writes short stories and is a storyteller. On November 14,2006 she was chosen to perform as storyteller with the internationally acclaimed Cherokee Nation Indian storyteller, Gayle Ross, at the Edna Manley College.

On October 3, 2007 The United States Embassy invited Dr. Small to perform her winning speech entitled RAIN at the opening cocktail reception of the launching of the Chiefs of Mission HIV/AIDS Conference in Jamaica. In the 2006 TALLAWAH drama competition held at the University of the West Indies, the French play that Dr. Small entered won two awards, one for the script that she had written which consisted of translations into French of six of MUTABARUKA’s poems and the one for the performance of poetry by a group accompanied by drums and. movement. Dr.. Small is the Director of her own company, TALA (Theatre Arts Learning Aids), which promotes the use of theatre as a teaching tool. Through TALA she teaches values and attitudes using the art of puppetry and storytelling. Her puppetry troupe is called PUPPETS FOR PEACE and they present puppet plays for children and workshops for Early Childhood educators and Sunday School teachers on the effective use of puppetry as a teaching tool. TALA offers a course in Public Speaking titled DYNAMIC PRESENTATIONS. She also conducts Drama with the children of the Portmore Missionary Preparatory School.

In 2010 Dr Small was awarded the BRONZE MUSGRAVE MEDAL by the Institute of Jamaica for excellence in theatre. In that same year she received the LIFE AWARD from the Jamaica Association of Dramatic Artists for over fifty years of contribution to theatre in the Caribbean as well as a plaque from the Republic of Guyana for her outstanding contribution to theatre. In 2011 Dr. Small was awarded her Doctor of Philosophy for her thesis on CREATIVTY AND THE USE OF THEATRE TECHNIQUES IN TEACHING FRENCH LANGUAGE AND LITERATURE Dr. Small is divorced and has one son, Seretse Small, who is a guitarist and CEO of his own company GRIOT MUSIC. 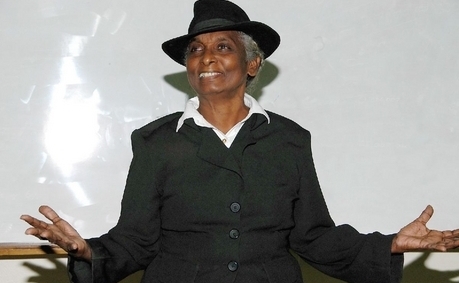