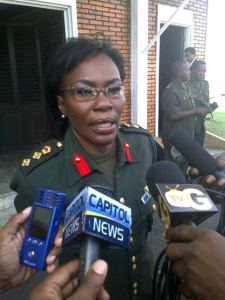 Windee Algernon will go down in history as Guyana’s first female army Colonel and the first full-serving female member of any of the Caribbean’s armed forces to hold such a rank.  Colonel Algernon was promoted in the Guyana Defense Force from Substantive Lieutenant Colonel to this male dominated rank in January 20, 2012. 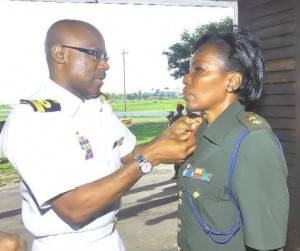 Reflecting on this milestone, Colonel Algernon told reporters that she has been in the army since 1980, served in a number of appointments and underwent several training courses locally and overseas. She said there is nothing difficult or easy about army life. “It is what it is, life in the military… what you have to do is to adapt and over the years given the training and exposure you are able to do that.”

Colonel Algernon said her appointment would encourage female ranks to aspire to attain the highest rank. “If I had to do it again, I would always choose the military for what it has done for me,” she stated.

A report by Demerara Waves Online News stated that Colonel Algernon is planning to retire in the near future.  What a timely and fitting way to crown her military career.  Congratulations Colonel – You Rock!