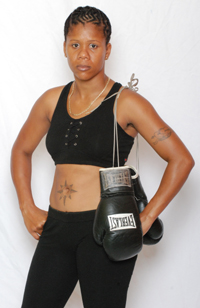 Shondell ‘Mystery Lady’ Alfred is a professional boxer from Guyana. She is one of the first female boxers to represent Guyana internationally and in 2011 the “Mystery Lady” was awarded “Most Inspirational Boxer of the Year” by the Women’s Boxing Archive Network (WBAN).  Alfred’s knockout victory over Corrine Van Ryck DeGroot was largely responsible for her winning the award in front of a glamorous line up of boxers worldwide. 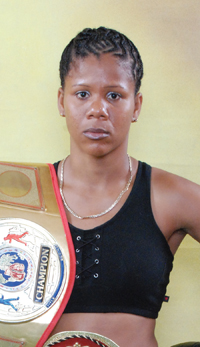 Shondell grew up in Albouystown where she took to athletics and later karate while in school. Her father Cecil and her uncle, Morris had been amateur boxers. She began boxing as a pastime before encouragement from her family and friends turned her hobby into a career.  Shondell made her professional boxing debut on February 19, 1999, beating Stephanie George by a four round decision at Georgetown.

Over the years, Shondelle has accumulated a 13-5-0 (4KO) record, and is currently a WIBA World Bantamweight champion. She stopped Corrine Van Ryck DeGroot in 2010 which in itself was quite a feat.  Shondell said after the fight, “I hope my victory is seen as a boost for women in Guyana, for I see myself as their ambassador and will always strive to be a good role model to young women in sport,”  It was this statement coupled with the Van Ryck victory that has caused the panel of judges to say that Alfred is definitely one of the most inspirational boxers this year!

Congrats Shondell!  You represent GT well and you Rock!