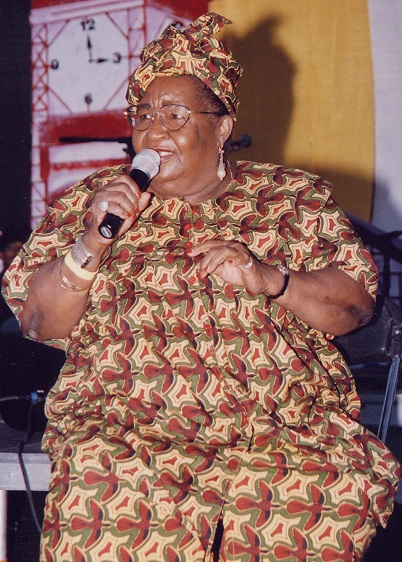 Monica Chopperfield, aka Lady Guymine  (1932-2009)  was a Guyanese calypso and cultural phenomenon. Popularly known for her hit calypso “Granny Fit” (which you can watch her singing in the clip below), she was born on July 31, 1932, in Berbice, Guyana and would grow to become “an important 20th century calypsonian.”

Her performing career started in a show produced by Zelda Martindale at the roofless Olympic Cinema on Lombard Street and she went on to sing across Guyana, in Trinidad and Tobago, Barbados, Suriname, French Guiana, Brazil, and the United States. Chopperfield shared the stage with some of the world’s leading performers.

She was a member of the Sam Chase and Jack Mellow Company and the Syncopators Band. As Lady Guybau in 1966, Chopperfield ventured into the calypso realm through participation in the Mashramani celebrations in Mackenzie, where he grabbed the attention of the Mighty Sparrow, with whom she toured for two years.  She also worked with some of Guyana’s most versatile calypsonians including ‘32,’ Lord Canary, and Lord Inventor all of whom composed some of her most popular calypsos.

She had a special fondness for the creative space in Georgetown that includes Bourda, Regent Street, Charlotte Street, Wellington Street and Robb Street. It was the location of cinemas, record stores, dance halls, and show promoters. Musicians could meet one another and observe various aspects of Guyana’s social, cultural, and political life. Lady Guymine experimented with many Guyanese musical styles and was particularly proud of the masquerade flounce in her rendition of 32’s,”The Donkey Story”. She was the 2003 receiver of the Guyana Cultural Association/Guyana Folk Festival Wordsworth McAndrew Award.