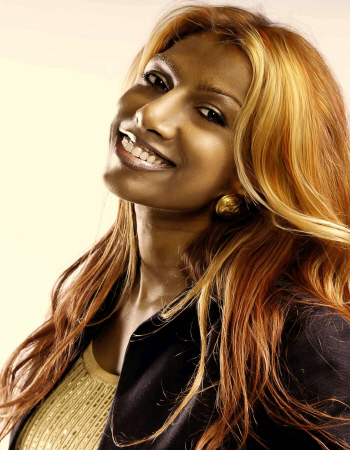 Pop music singing sensation Zandra Brown, was born in Guyana, South America. She grew up listening to a diverse array of artists that inspired her, including Tina Turner, The Beatles and Bob Marley. Before moving to America at the age of 18 with her family, she was always in the spotlight, representing her school in dancing performances and fashion shows.

Zandra joined her church choir in 2008 and shortly thereafter began writing songs as an outlet to share her innermost spiritual thoughts. Her first CD “Because You Love Me” was very inspirational to many. Some of her songs were heard on the radio station on the Island of Dominica and also played on WFHB Fire House Broadcasting and various Internet radio stations such as Southern Gospel Music Forum radio program.

Because of the outstanding lyrics from her first CD she started receiving requests to write lyrics for other artists. This process stirred up many other emotions she had been keeping inside. In 2010 Zandra felt that she wanted to share some of her own life experiences for her new CD and she created the title “It’s Your Life”.

Zandra wrote all the songs on her latest 2013 Pop CD “It’s Your Life.” She has also collaborated with one of Nashville’s most renowned musicians Jeremy Medkiff, who produced, mixed and mastered all of the songs for this latest release. Playing piano/keyboard on the tracks is Jonathan Brown, who recently won the BMI song of the year award. Some of Nashville’s best musicians like Mark Hill, Garth Justice and Duncan Mullins have added their insignia to the masterful tracks. Zandra also Co-wrote one of the songs with a member of the group called “London Beat”, Charles Pierre. Charles also assisted in producing her powerful vocals.

Zandra is certainly no stranger to the crowds. She has entertained at various venues and charitable events, such as The United Way, Hospice fundraisers and she sang the National Anthem at The Stars Over Ocala Awards. She also performed during the Singles Retreat on “Cruise With A Cause” in 2011 and led worship in a school in Jamaica for charity. She shared the stage with many past Olympians for Bridging the Gap 2012 London~England Olympic Outreach. Zandra was featured in the 2012 Best of the Best edition in the Ocala Magazine where her fans voted her as the “2012 Best Musician”. Her artistry has been acknowledged in the Guyanese magazine, “Aspara” and Southern Gospel Music Forum (SGMF).

“Song writing is very therapeutic.”  Sandra shared.   “It’s gives me the opportunity to re-live and release some of the trials, events and experiences of my past and share my feelings and views with the world”. It’s  “My Side Of The Story”.

Scott Evans from Southern Gospel Music Forum News stated, “Every once in a while we get music from an artist who is just so talented that we cannot ignore it even though the style may not be Southern Gospel Music. Zandra Brown is one of those people with that kind of talent.”  So get ready to drift into a story you might relate to from the music of Zandra Brown’s “It’s Your Life.”