Okema Moore has conquered many of the things she set out to do in life.  Beginning in entertainment on the famous children’s show, Sesame Street, Okema knew at an early age that she wanted to sing and act. Over the years she has opened for classic artists including Joe and SWV, sang backgrounds for Musiq Soul Child, and has been mentored by the likes of a vocal coach to the stars Ankh Rah and Grammy-winning writer/producer Carvin Haggins. Okema has also competed and won Apollo’s Amateur Night, performed at BB Kings, and co-hosted the global webcast for New Year’s Eve in Times Square 2012, which was viewed by more than 24 Million people worldwide. 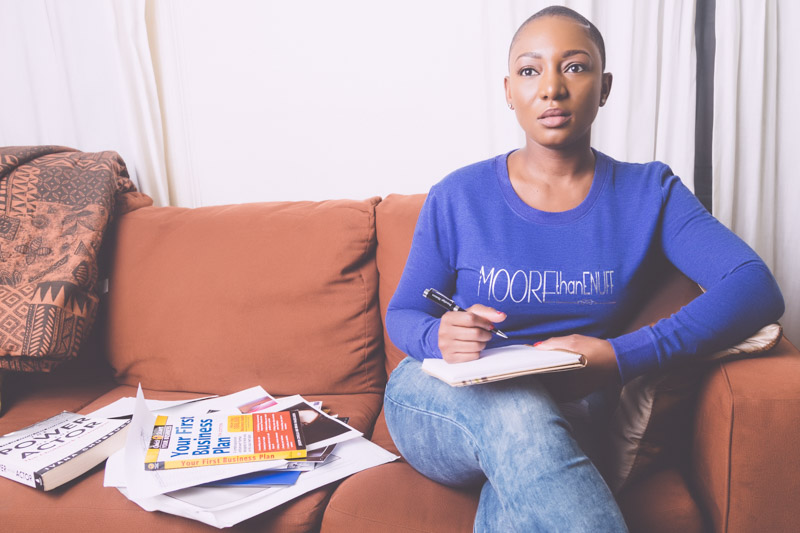 Born in Brooklyn, New York to a Guyanese father and Barbadian Mother, Okema is a first generation American who is very proud of her South American and Caribbean heritage.  An entrepreneur at heart, Okema is also the owner and CEO of  “MOORE Than Enuff Media” which serves as home base for her solo endeavors and business clientele, providing services such as content creation across platforms, brand development, writing/editing services, public speaking, media services and mentoring.  Okema is also very passionate about philanthropy and community service.

GGR  caught up with this multitalented businesswoman for a look into her life in front of, and behind the lens.

You have an interesting background.  Tell us a little about your family history.

My father is Guyanese-born and bred and for many years I thought I was too (lol), but I was born in Brooklyn. As a child, I spent my early childhood between Guyana (South Ruimveldt, Georgetown), Brooklyn and traveling the Caribbean with my father.  My mom’s family is Bajan and Southern and all of my paternal family is Guyanese dating back many generations. I consider myself a Guyanese-Bajan to honor both of my parents’ background,  but I most closely identify with Guyana, as I spent so much time there growing up vs Barbados. However, I’ve visited Barbados a few times with my father. 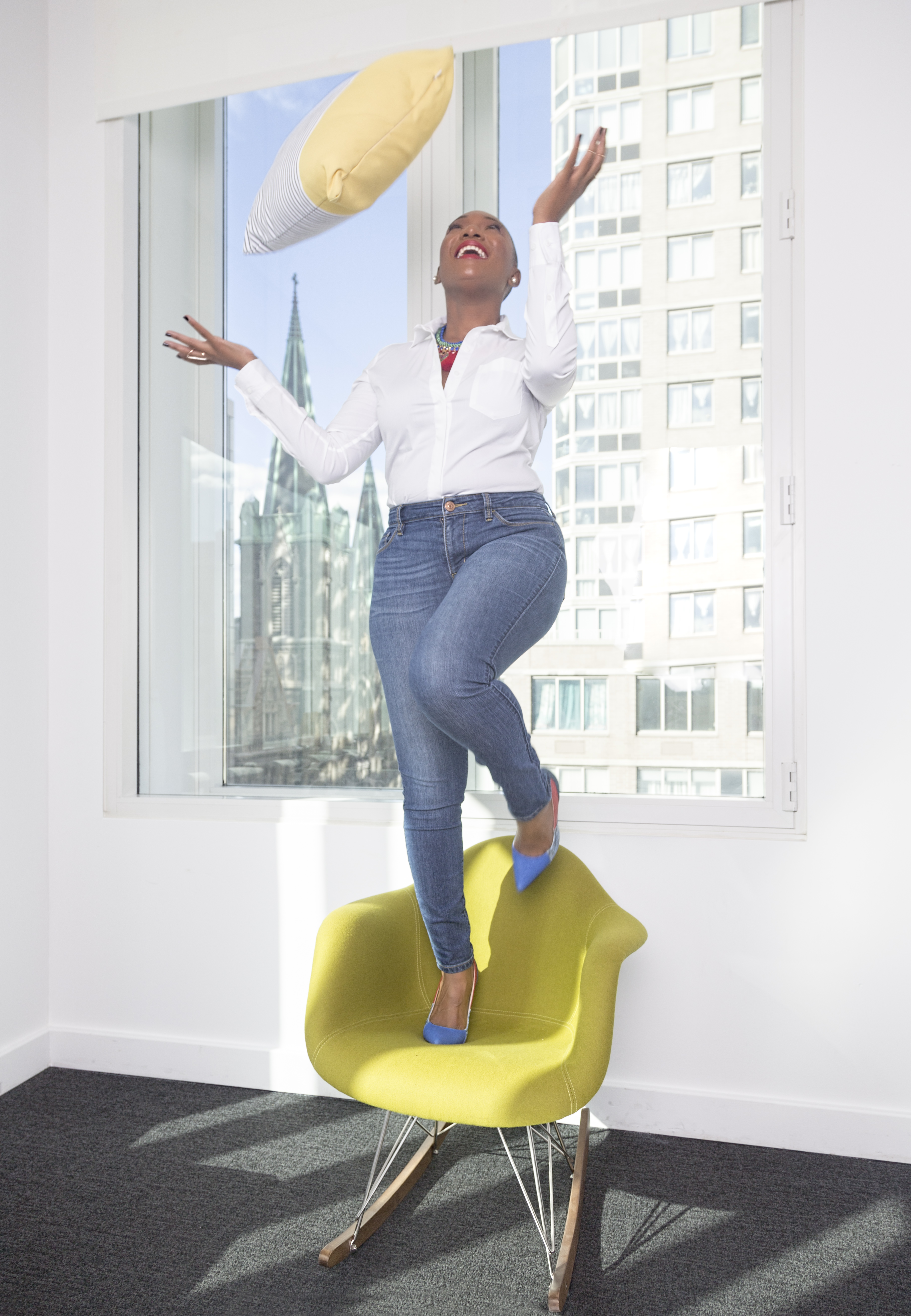 Throw your dreams into space!

You’re definitely a “triple threat” singer/actress/producer. What made you pursue a career in entertainment?

It started as a child. I was often with my grandmother when I was younger and to keep me out of her hair and preoccupied on weekends, my mother enrolled me in acting, dance, music…anything to keep me busy. In 1985, I landed a  role on a season of Sesame Street and from there I went on to join an all-girl group in Brooklyn called Cuties In Affect (C.I.A.). We toured with Black Expo opening for artists such as SWV, Joe, and Intro. We also performed with the likes of Biggie and Tupac (on the same stage together in 1993 at Jack the Rapper).

We were later signed to a record deal (my first and last) and our deal was with Tamar Braxton’s husband, Vincent Herbert and Aaliyah’s Uncle (and Gladys Knight’s ex-husband) Barry Hankerson. There were issues with the label and we got shelved. I went on to graduate high school and college then moved to the Philly Delaware area. There I learned a lot about singing and performance, as a solo artist as well as a background singer. I worked with Musiq Soul Child and did backgrounds on his second album. However, I learned a lot of what to and not to do through many of those experiences. I’ve been blessed to learn, train, grow and build a very respected brand across several disciplines in entertainment and media. Now I have added writer, producer, and director to the list. 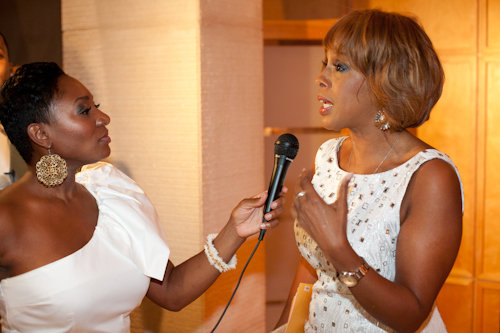 What keeps you motivated?

Initially, my motivation was to be recognized and to do anything that was not inclusive of a cubicle or a standard nine to five. Nothing wrong with nine to five as I often fall back on office jobs when work is slow. But personally, it’s only tolerable for a while if the work or at least the environment is not creatively based.  Now, my motivation is much less self-serving. I create to represent voices, perspectives, and stories that deserve the shine.

“I have less interest in being famous, as I do in being respected for doing great work.”

Whether it’s a solid portrayal as an actor, running an efficient and organized set as a producer, or writing a moving film, PSA or commercial, just putting out great work is my goal. And then as a creator, I am able to create opportunities for others. By writing, I’ve now created a need for talent to bring that writing to life. As a producer, I’m hiring a crew that can be ethnically and gender diverse. With my blog and websites and shows, I am able to highlight the work and accomplishments of others and expand their audience and exposure. Much like what you all are doing with Guyanese Girls Rock, which I love and admire by the way!

What would you say is your biggest accomplishment?

To date, I think my proudest, though not my biggest accomplishment, is that many people connect with me to tell me how much I inspire them. I get so much amazing feedback via social media about how my transparency in hard times, my blogs, and my energy encourages them. To me, that is proof positive that I am living in and fulfilling my purpose on this earth. Being able to assist others – creatives specifically – with feelings of being overwhelmed or self-doubt or fear…that is amazing!!!

Have you received any recognition or awards for your work?

I have co-authored, directed and starred in four short plays that all won the Audience Choice Award in the NY Theater Festival (Nov and December 2012, October 2103, May 2014), Produced and did voice over for a single spot in 2102 for the Rhode Island Film Festival that was nominated for a regional EMMY Award in New England, Best Scene in the 2015 October Film Festival Actor Contest, 2014 Beauty and the Beat Heroine of Excellence recipient, 2nd Place Winner in 2013 at The famous Amateur Night at the Apollo, 1st Place Winner in the Paul Mooney Almost Famous Vocal Competition 2014, Grand Prize Winner of the DREAMGIRLS Online Vocal Competition Dreamworks Films 2011 ($5000.00); featured on many websites and in a score of print and digital magazines. I am also a member of SAG/AFTRA, Equity Membership Candidate, NY Women in Film & Television member, Independent Film Project member, Member of Sigma Gamma Rho Sorority Inc. (Spring 98, Alpha Pi Chapter). 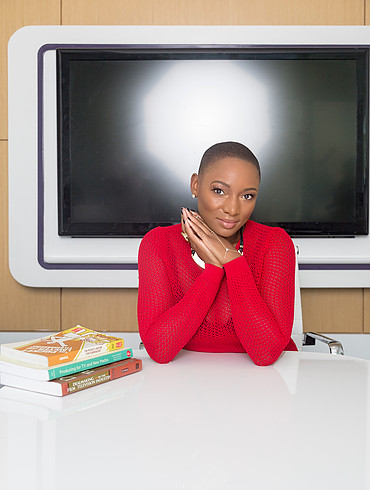 What might someone be surprised to know about you?

I have survived a host traumas in my lifetime. But I have overcome much of it and continue to heal and progress thru professional therapy, prayer, and a huge support system. I find, especially in communities of color, or old school West Indian based homes, therapy is looked down on and mental issues are often overlooked or brushed over. However, I truly support the need for and use of professional help. It’s a way to overcome, attack your issues head on and prevent functional depression, suicide and the like.

What are the most important lessons you’ve learned in life?

My most important life lesson is to bet on myself and to believe in myself. I am a true nurturer by nature, and I spend a considerable amount of time caring for others. I got it from my grandmother (lol), but in recent years I have begun to realize that it’s okay to push myself and put a sizable amount of energy into my own life, dreams, and goals. While it’s been a huge social sacrifice, it is paying off!

Did you have any key mentors or people who deeply influenced who you are?

I have been influenced by many people. A host of educators in my life who saw my potential early on, and pushed me to do more than being chatty in class. My vocal coach, Ankh Rah (coach to the stars), has been hugely influential. He makes me shake off any ideas of mediocrity. He praises my growth, but will never let me rest in that. My big sister in the business, actress, Branding Guru and Style Influencer Tamiko White. She showed me how to be my own cheerleader when no one else is there to do it. She taught me a lot by way of operations in business, and she just loves me thru my mess. Lol

Are there any major challenges or obstacles that you’ve overcome?

I would say insecurity and fear have been my biggest challenges. I grew up in a family that was not really emotionally open. As the youngest child for most of my life, with significant age differences, I was teased a lot. Too skinny, too dark, too nerdy, too ugly, etc. Then my West Indian family would tease that I was too Americanized after years in the US. It was like I never had a place to fit in. Then as I got older weight became an issue and I was teased because I was chunky. I would date men who preyed on my insecurities and tried to manipulate me, so I always felt less than. But as an actor, if you don’t bring your confidence to the table…it shows. So I had to really do an emotional overhaul. That is why I named my company MOOREthanEnuff Media & Consulting. Not just because my last name is Moore, but to remind myself as well. I also have two tattoos. One that says PURPOSE, where the P is made out of a film reel and the S is a treble clef. The other says create/ive/ivity, it means create, creative, creativity. Again, all reminders to do what I’m supposed to do and be whom I’m meant to be in this world.

What advice would you give a young girl who wants to pursue a similar career?

My advice would be to learn all that they can. Also, I’d encourage them to be organized and competent in every aspect of their craft and to expand themselves to do a series of related things across the board. Be your best at each thing, but be diverse in your disciplines. Lastly, you are greater than your gender, your socioeconomic standing, your fears, your failures and your haters. So go out and be the BEST in spite of all of that!

What would say is the essence of being a woman who rocks?

What’s next for you, what are you most looking forward to?

Well, I am releasing a short film this winter that I co-wrote, directed, produced and star in called Mars & Venus: Operation Equilibrium. I also have several speaking engagements throughout New York addressing young people about being amazing and pursuing creative careers. I am always energized and encouraged when I speak to young people. They really remind me why it’s important to be mindful of what I do and say. Overall, I am just really excited about all that God has for me to do in this crazy business and the lives that will impact me, and especially those I will impact. I also hope to get back to Guyana soon. It’s been almost three decades since I was last home…it’s about time. 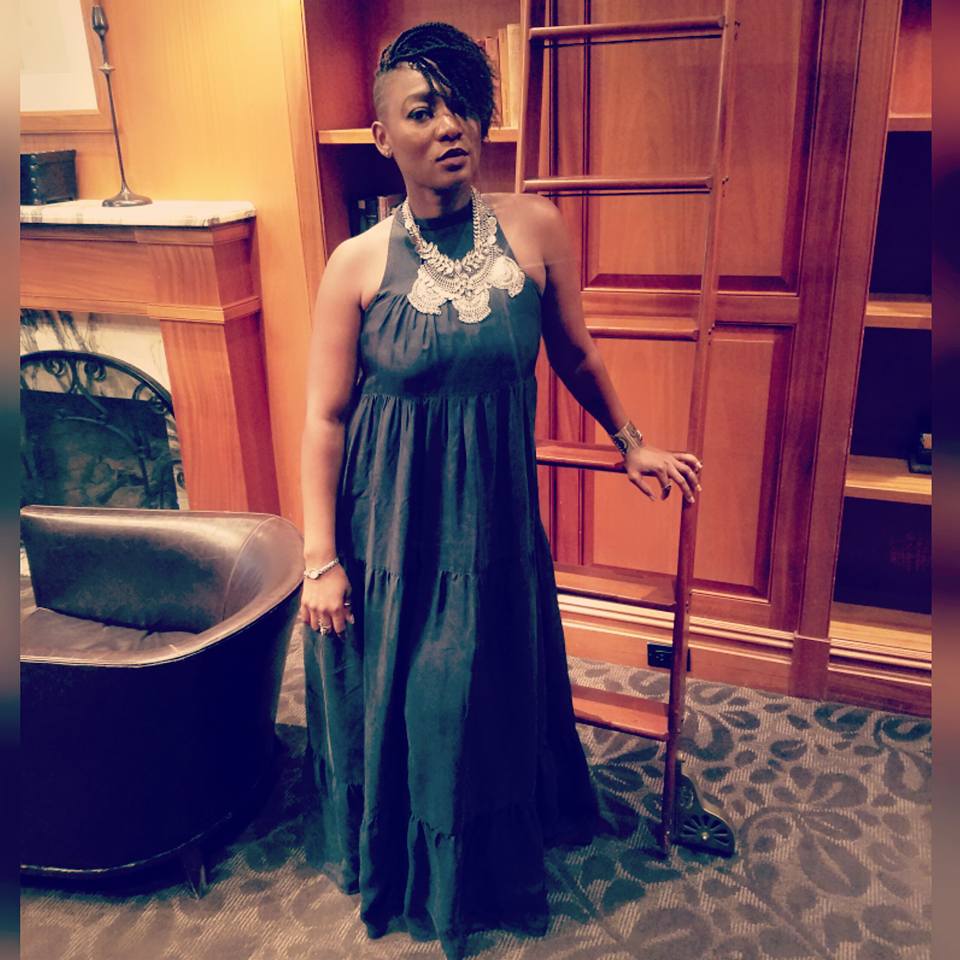 Okema on the set of Spiked Lemonade.