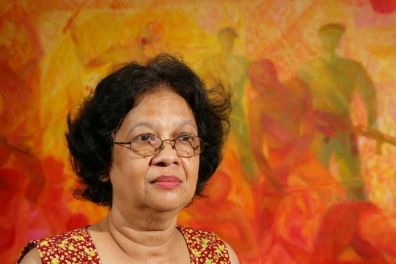 Bernadette Indira Persaud is one of Guyana’s best-known artists, writers and educators. She was born in Berbice in 1946 and is a graduate of the University of Guyana and of the Burrows School of Art in Georgetown. Her painting career began in the early 1980s, when she felt a need to express her ideas through her creativity. In 1985, she became the first woman to win the Guyana National Visual Arts Competition, and she continues to produce artworks that encourage a social, political and historical consciousness. Her most famous work from her series  titled “Gentlemen in the Gardens”  depicted camouflaged soldiers in a garden setting between tropical foliage like that of the renown Botanical Gardens in Georgetown. 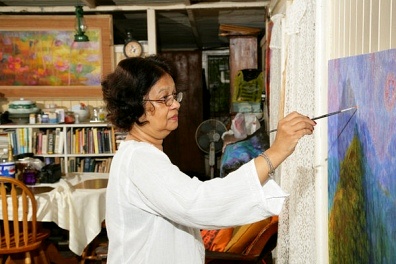 Bernadette’s paintings have been exhibited and her writings published in Canada, the Caribbean, the United Kingdom, the United States of America and Guyana. She has also written about art for numerous Guyanese publications.Bernadette was recently inducted into the Caribbean Hall of Fame for Excellence in November, 2012. The award recognizes her outstanding contribution and achievement in the field of Visual Arts. She was selected by the Committee of the Caribbean Development for the Arts, Sports and Culture Foundation in association with the Caribbean Community.  The Foundation’s main aim is “to recognize the development of the Arts, Sports and Culture in the Caribbean, and to encourage the natural genius of our people to reach the highest level. This prestigious award, is made by the Foundation in recognition of the notable contribution made by those who have achieved excellence in Arts, Sports and Culture. 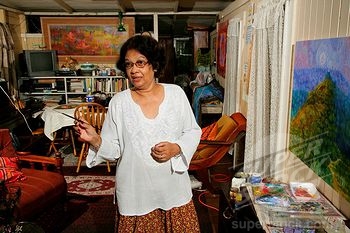 Bernadette, who has participated in workshops on art, as far off as the Republic of Mauritius, has had a number of regional and international exhibitions and has her pieces in private collections overseas, including Russia, England and North America.  Her notable awards and accolades include:  The Distinguished Visiting Artist’s Award – awarded by the Indian Council for Cultural Relations with India, in 2005  Guest Artist – International Women’s month – Philip Sherlock Centre for the Creative Arts, UWI, Jamaica (1999) and the Arrow of Achievement, AA, 1997 (Guyana). Bernadette’s regional and international publications were featured in countries that include Germany, New York, India and in major mainstream media houses such as CNN and BBC.

In a 2004 interview with Caribbean Beat, Bernadette  talked about what movitated her and said ” In all of my work, whether I’m dealing with the ancestral cultural aspect  of it, or whether I’m dealing with the man with the gun, I’m trying to show  everyone that here is beauty — which, though it may be close to you, you don’t see, you don’t notice, because of your own conditioned blindness and ignorance, your own cultural limitations. This is what motivates me, this is what I try to take on in my art.”