Sometimes, when Dionne Hammiel wants the attention of her rambunctious kindergarten class, she stands on the table. Other times, she lowers her voice to a whisper, making her instructions a very important secret that every child strains to hear.

The hushed message at John Burroughs Education Campus in the District was utterly routine on a recent day: “We need to go to the bathroom, drink some water, come back, and pick out our books to read.”

But the children were instantly alight, excited about the next step in their kindergarten ad­ven­ture.

Hammiel, with her infectious enthusiasm and outstanding results, is known for the towering expectations she sets for the small children in her class and the deeply analytical approach she brings to her own practice and the skills each child is developing.

“She creates an environment in her class where they really want to do well,” said her principal, Aqueelha James. “Her students want to see her energy, and they really, really work very hard.” 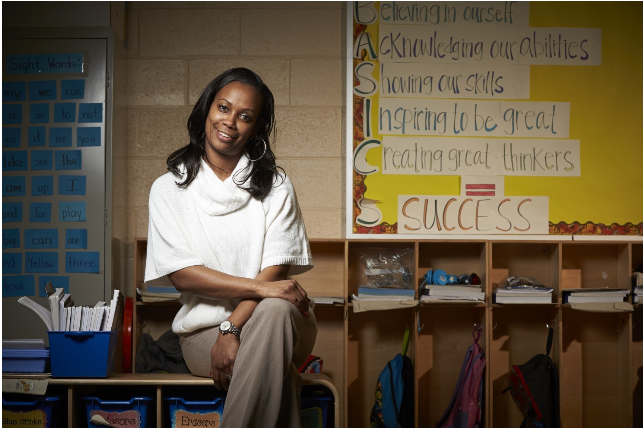 The result? “The children who leave her are not on the first-grade level,” James said. “They are beyond that.”

Hammiel, 37, is the daughter of a schoolteacher, as well as the cousin and niece and granddaughter of a family full of schoolteachers. Her approach is also close to home: “I look at my students as my own kids,” she said.

The Guyana native moved to the District when she was 11, went to Orr Elementary and eventually graduated from Wilson High School. She majored in human development and family studies at Pennsylvania State University, then started her career as a social worker at a local day-care center. She became a teacher at a Head Start center and found her niche in early childhood education. She has been teaching at John Burroughs in the Brookland neighborhood for nearly 15 years.

Kindergarten has become more academically rigorous in the past decade, and Hammiel keeps a “data wall” at home tracking her students’ performance. She sets goals for each child and celebrates their progress. She holds their parents to high standards, too, giving them clear directions for what she expects the children to do during spring break.

She said she loves teaching kindergarten because the children are “sponges.”

“The more you give them, the more they will take,” Hammiel said. “They want to please you, and every day there is the joy of seeing their success.”

She teaches lessons in creative ways to appeal to different learning styles.

When the children were having trouble with vowels, she wrote a song they could sing using their hands, with each finger representing a vowel. Now when they are writing, she sees them taking a break to look at their hands before returning to the page.

When introducing a word, she reads it in a sentence, shows a picture or acts out the meaning. And she is always looking for challenging words to share.

James, the principal, said she was skeptical when she saw that Hammiel’s lesson plan early in the year included “array,” “linear” and “circular.” But later she heard the children using the words when discussing the line they had formed in the hallway.

“From the outside, you think, ‘These are kindergartners,’ ” James said. “But they rise to the occasion.”

“The moon, that’s where I set the bar,” Hammiel said. “When they leave me, they go out there and shine.”
The Washington Post has honored teaching excellence in the Washington region for three decades, with more than 500 men and women winning the Agnes Meyer Outstanding Teacher Award for their work in the classroom, creativity and contribution to the improvement of education.

The awards are named for Agnes Meyer, wife of Eugene Meyer, who purchased The Post in 1933. She was a staunch supporter and defender of public education and believed in the motto that still guides the awards: “Quality education is essential to the well-being of our society, and good teachers are the foundation of our educational system.”

The Post also honors the region’s principals with the Distinguished Educational Leadership Awards, recognizing those who go beyond the day-to-day demands of their position to create an exceptional educational environment.

The teachers   are examples of what works in the classrooms,  such as tutoring high school freshman at risk of failing, recruiting students for AP classes who didn’t consider themselves advanced-course material, and writing songs to help kindergartners master vowels. Winners in both categories receive a $1,000 cash award. Here, The Post’s education team profiles a selection of the 2015 winners, taking us into their classrooms and showing why they are some of Washington’s best educators.