This poster image was taken from the Imperial War Museums website and, according to the site, it shows a female worker from British Guiana working for the Auxiliary Territorial Service. The poster is of Private Diana Williams, a recruit from British Guiana. 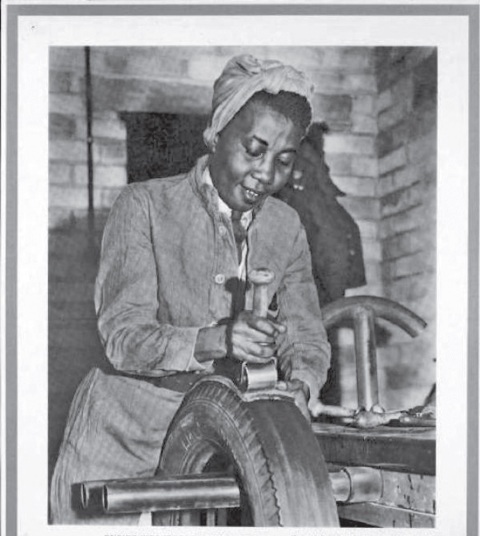 According to the poster, part of Diana’s work consisted of helping with the maintenance of army vehicles. Here she is seen beginning the job of retreading a tyre in the corner of a repair depot in the Midlands. Many girls from the West Indies volunteered for service with the Auxiliary Territorial Service. Some, volunteering for service abroad, went to Britain.

The Auxiliary Territorial Service (ATS) was created in the UK in September 1938 from three organisations: the Emergency Services, First Aid Nursing Yeomanry and the Women’s Legion. When war was declared in September the following year, for women this meant volunteering for the ATS so that men could be released from day-to-day tasks to fight on the frontlines.

The BBC notes that the first women who joined the ATS worked in traditional female roles as cooks, clerks and storekeepers. Later recruits were asked to carry out trade tests to establish which area they should go into. For example, if a woman had been a shorthand typist she would almost certainly be assigned clerical duties.
During the course of the war, the range of duties undertaken by the ATS expanded and women worked as telephonists, drivers, mess orderlies, butchers, bakers, postal workers, ammunition inspectors and military police.

There is no record of the year of the poster’s publication nor who was its artist.