When she married David Granger, Sandra Chan-A-Sue knew she was going to be a military wife which meant her husband would be away from home a lot of the time.

But what she did not know was that forty years down the line she would be married to a politician, still with the name of David Granger.

“I did not believe him…” the then 62-year-old Sandra Granger told the Sunday Stabroek in a 2011 interview when asked what her reaction was when her husband broke the news to her about entering the race to become the presidential candidate for the PNC. The PNC’s membership later elected him, and he then became the presidential candidate for A Partnership for National Unity (APNU).

However, her initial disbelief later changed to support since she realized that her husband was not only serious but was very sincere in his plan to effect change in Guyana should he become the president. In the end, APNU did not win, but Mrs. Granger is not entirely disappointed at the outcome of the election as the electorate has decided that Guyana should be managed by a minority government which will be forced to consult with the opposition parties in the National Assembly.

She is optimistic once all the parties have Guyana’s best interest at heart then the country will move forward, and there is so much she would like to see done to improve the lives of Guyanese, especially the many struggling mothers who sometimes cannot make ends meet.

Mrs. Granger’s support for her husband’s latest endeavor could not have been that easy, as both of them are retirees and she already had things mapped out in her head, she said, as to how her days without the daily grind of work would be spent. Anyone who had met her a few years ago would have discovered that she was employed at the Caricom Secretariat from where she retired as a senior programme manager.

But she would tell you that being a career woman and raising two children with her husband away much of the time, was never easy and the absence of the ‘head of the home’ resulted in her being a very independent woman, something she now cherishes. It is an independence she passed down to her two daughters – Han Ruth and Afuwa – who were both “aghast” when their father broke the news about entering politics. However, like their mother, they later lent him their support. While she brought up her daughters to become independent, she always ensured that when her husband returned home from one of his work stints it was a big occasion for the family, especially the children.

And she was never big on Christmas decorations in the home and only did it because her daughter Afuwa loved it. But since Afuwa moved out Mrs. Granger said Christmas now is only about the getting together as a family and the cooking and eating. She even gave Afuwa many of the Christmas home decorations when she was leaving. 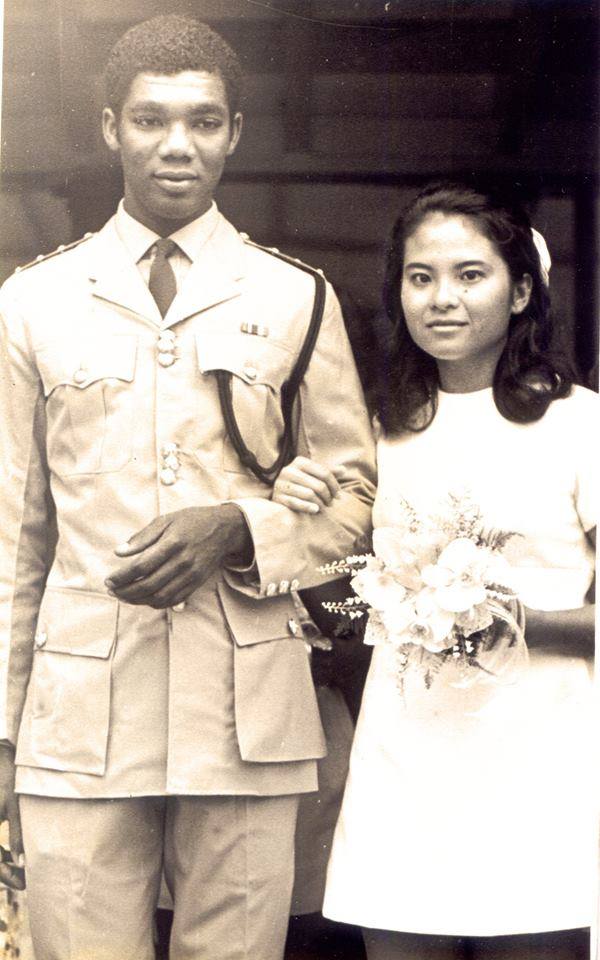 If David Granger had to be away a lot during the campaign for the election, his wife was not adversely affected by his absence, as her initial experience in this regard came within the first week of getting married when as a 22-year-old her husband was called on to serve his country. The two had met through his sister who was her friend, and Mrs. Granger said that their first “so called” date was the movie theater with his sister in tow.

It was a very relaxed Mrs. Granger who welcomed the Sunday Stabroek into her D’Urban Backlands home, but she later indicated that since she was a very private person giving interviews to news agencies was not something she relished. But now that her husband is a politician she knows it is something she has to adapt to. So it was while rocking her six-week-old granddaughter – one of Han’s three – she gave a glimpse into her life.

While she grew up in the city many of her holidays were spent in the North West where her parents came from, and as a child, she loved going on holiday in the ‘country’ as she and her siblings were exposed to various ways of life.

Her independent spirit may not have only derived from the frequent absences of her husband, but also from her mother, whom she proudly revealed still walks to the market to buy her daily newspaper and to chat with the vendors she used to shop from in earlier years.

Mrs. Granger is a woman who does everything around the home, and while she once had a helper, she now does it alone – the cooking, the laundry, the cleaning and everything that a woman has to do to make a house a home.

It was something she did while raising her children and working, and when they grew up and moved on she continued while working.

And so it was when she often had to be at her husband’s side as he campaigned around the country. But she says it is something that she does not regret as she got to know her country and meet Guyanese from all walks of life.

She told the Sunday Stabroek that many Guyanese wanted change and as she listened to them, many had problems which were not being addressed. Of utmost importance to her is the fact that VAT is levied on simple food items. Mrs. Granger said she cannot understand how the committee that came up with the items to be taxed could have included certain basic food items. This, she said, put women in a very difficult position and made it harder for them to provide for their families.
She hopes that with the new dispensation in parliament the tax system would be addressed and those food items would be taken off the list of taxable items.

And Mrs. Granger was not moved by the many allegations leveled against her husband on the campaign trail.

In reference to the most recited line which first came from no less a person than former President Bharrat Jagdeo and was used by many in the course of the PPP/C campaign, Mrs. Granger said her husband does not have “blood on his hands.” Jagdeo and others in the PPP/C camp had accused the former army commander of having blood on his hands by the fact that he was in the army when two PPP activists were killed by members of the GDF at the No 64 Village Polling Station during the 1973 elections.

An unfazed Mrs. Granger said those who want to know the truth, know the truth, and others just have to read the report on the incident, and they would learn the truth about what happened. She said her husband is a man of integrity and nothing said on the campaign trail or maybe said in the future could change this.

She is convinced that David Granger as opposition leader will work towards making life better for Guyanese and making the country a better one. 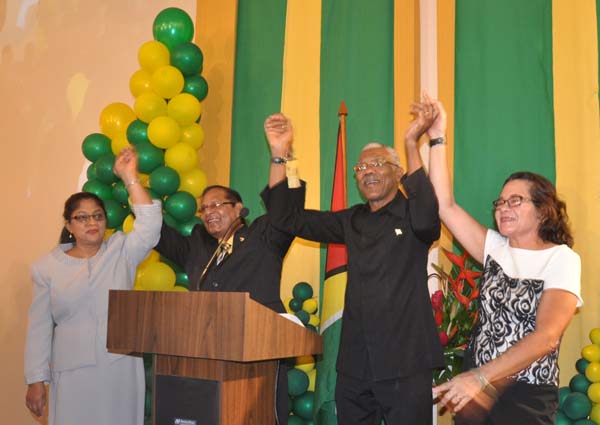 Today her husband was sworn in as the 8th President of the Republic of Guyana.  First Lady Granger promises to help Guyanese women rise above their circumstances through innovative and practical approaches.  During a recent press conference, she said that there is no doubt that Guyanese women are strong and industrious and that the APNU+AFC coalition is proud of the tremendous strides women have made in the past 40 years.

3 comment on “Meet Sandra Granger, First Lady of the Republic of Guyana ✿FLORG✿ – She Rocks!”