Earlier this month I had the pleasure of watching the young women of St. Albans Episcopal Church perform the Maypole dance at the annual Guyana Folk Festival held in Brooklyn, NY.   I remember doing this as a little girl growing up in Guyana dressed up in frilly dresses and socks with colorful hair bows, as we danced and weaved the ribbons to the sound of music. Watching this recreated many, many years later brought back sweet memories. A maypole is a tall wooden pole erected as a part of various European folk festivals, around which a maypole dance often takes place. Below is a little history of the maypole tradition and dance. 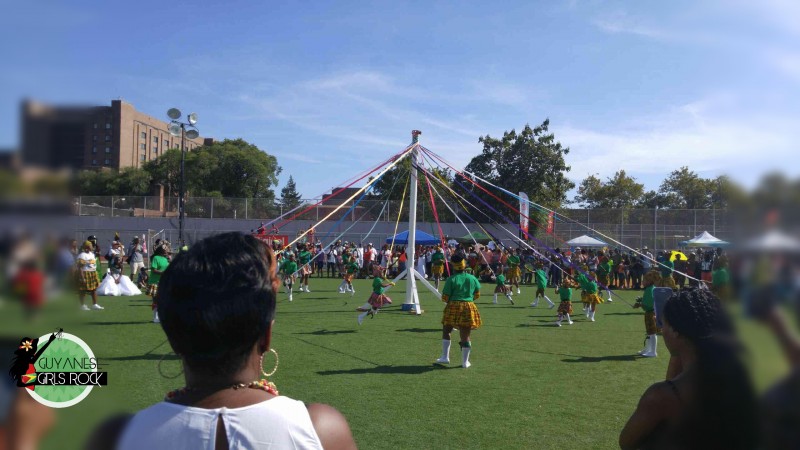 Maypole Plaiting in Brooklyn performed by dancers from the St. Albans Episcopal Church

The festivals may occur on May Day or Pentecost (Whitsun), although in some countries it is instead erected at Midsummer. In some cases the maypole is a permanent feature that is only utilised during the festival, although in other cases it is erected specifically for the purpose before being taken down again.

Primarily found within the nations of Germanic Europe and the neighbouring areas which they have influenced, its origins remain unknown, although it has been speculated that it originally had some importance in the Germanic paganism of Iron Age and early Medieval cultures, and that the tradition survived Christianisation, albeit losing any original meaning that it had. It has been a recorded practice in many parts of Europe throughout the Medieval and Early Modern periods, although became less popular in the 18th and 19th centuries. Today, the tradition is still observed in some parts of Europe and among European communities in North America.

THE DANCE:  Maypole dancing is a form of folk dance from Germany, England, and Sweden. There are two forms. The first and most popular consists of dancers that perform circle dances around a tall, garland-festooned pole. In the second, dancers move in a circle, each holding a colored ribbon attached to a much smaller pole. As they move around the pole, the dancers intertwine their ribbons either in a web around the pole or to plait it to the pole, itself. To unravel the ribbons, the dancers retrace their steps. Historians believe the first maypole dance originated as part of Germanic pagan fertility rituals. Originally, the dancers danced around a living tree. While dancers usually perform this dance in the spring on May 1 or May Day, those in Sweden perform it during their midsummer celebrations.

May fairs and the art of Maypole plaiting – Stabroek News
The second kind of maypole dance, with origins in the 18th Century, began as a traditional or artistic dance popular in Italy and France. Eventually, traveling dancing troupes performed it in London theaters, thus bringing this traditional dance to larger audiences. An English teacher training school adopted the maypole dance and soon it had spread across most of central and southern England. The dance became part of the repertoire of physical education for girls and remained popular in elementary schools in both England and the United States well into the 1950s.
Maypole plaiting in Guyana is usually performed during the Mayfair celebrations and Beauty Pageant.  Given it’s history of origination in Europe it might be safe to conclude that Maypole Plaiting was adopted from Great Britain during their rule over  Guyana (then British Guiana).

4 comment on “Maypole Plaiting – Have You Ever Danced the Dance?”