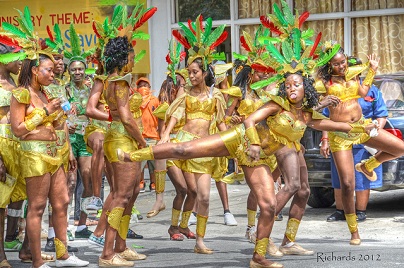 MASHRAMANI, often referred to as “Mash”, is the equivalent of Guyana’s Carnival and is an annual festival that
celebrates Guyana becoming a sovereign Republic on 23 February 1970. The first Mashramani festival was celebrated on Feb 23rd, 1970 in the mining town of Linden and has since become a major national annual event . There are spectacular costume competitions, float parades, masquerade bands, and dancing in the streets to the accompaniment of steel band music and calypsos. Masquerades frequent the streets performing acrobatic dance routines, a vivid reminder of Guyana’s African heritage. The Mash Day depicts a hive of activity in Georgetown from Vlissengen Road and lrving Street all the way to the National Park. Thousands of people summon to the streets to participate in the annual Mashramani celebrations, which has been a part of Guyanese culture
for almost 40 years. In 2010, Guyana will celebrate 40 years as a Republic and Mash is expected to be bigger than ever.