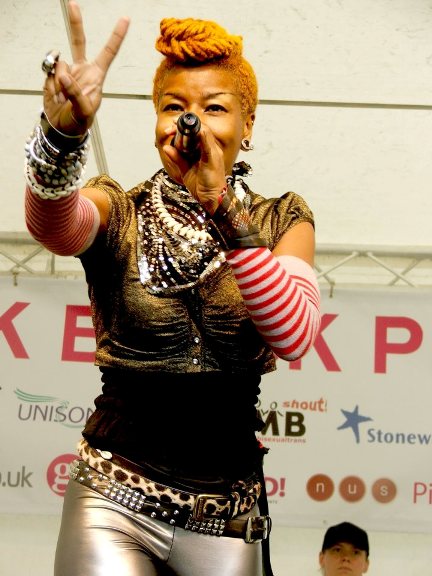 Khadijatou Doyneh, aka K2, is a Guyanese raised and London based singer-songwriter, author,  spoken word poet, musician, and dancer. Her extensive travel across Europe, USA, Canada and Africa at an early age  gave birth to Khadijatou’s ‘lifetime travel-bug’ and wish to contribute  to creative culture.  She  started her performing arts career in dance theatre after graduating with a BA (Hons)  Dance and Spanish.  She discovered her aptitude for  writing, blending words and rhythms, and became a recognized artist on the  underground poetry scenes in the UK since 1994.

Khadijatou travels and spreads her  music, message, drum and spoken-word poetry artistry backed by her 7 piece support band ‘Slo’burn’ (bv, trumpet, keys, guitar, bass, percussion, kit drums/MD) and VJ. She plays the djembe  and percussion as she energetically sings and dances to the music.

Khadijatou’s international work actually began with a  Martial Arts performance tour to the Caribbean islands of Barbados, St. Kitts and Trinidad  & Tobago. After graduating, she lived in Spain for a year, then be began to travel again.  This time, she undertook training in  West Africa Dance, Culture, Song and Music with the Kara Chow Dance Troupe in Gambia.   Her voice as a jazz trained singer developed its own expression. Meanwhile  Khadijatou decided to focus on dance theatre.  She started a Dance Company  (‘Isigi’) and toured as a choreographer and dancer.  She continued  developing her voice, writing, drumming and was soon armed with a catalogue of  songs.  Khadijatou wrote poetry but decided to test her writing strength  by giving it to established and respected ‘poet’, Storme Webber, to read whilst  in London to  gauge the public response. That worked.  Khadijatou trained in African  Drum and later formed a ‘Women’s Drumming Circle’, as well as being drum  accompaniment to poets and singers in their gigs. Realizing her own voice  again, combined and honed her skills. She emerged appearing on Poetry, Music  and Dance scenes, doing live collaborations with musicians.

There was a need for more performance platforms on the  underground scenes at good venues, so Khadijatou became an event producer,  inviting talented poets, musicians, singers etc to guest and feature in her own  hosted promotions with full live bands across London.  These  collaborations with musicians and artists also helped her development. Khadijatou was invited on several occasions to tour  her music and spoken-word abroad at the Afro Vibes Festival (Melkveg) and on  radio in The Netherlands and at the ISS in The Hague etc.Releases: She put out a limited edition of her first record  entitled ‘AA Batteries’ on 12” vinyl and 4  track EP ‘Ama Woman’ under K2word play  independent label, secured worldwide distribution & it sold online globally.  Khadijatou went on to perform in other parts of Europe as well as South Africa and the UK.  She was also invited to New York in 2006 to meet  key folks from the music industry over there, which confirmed that there is a  definite market and demand for her type of music. Selected by the Arts Council  of England to present tour-ready ‘Sex, Lies & History’ in their ‘Decibel  Performing Arts Showcase’ at the Contact Centre in Manchester in 2009, to an  audience of venue and festival programmers.  She released her four track  EP, and was invited to tour UK  regions.A trailblazer in South Africa since 1995. 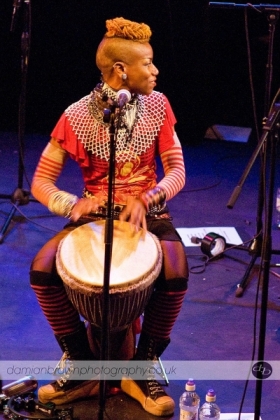 After being introduced to South Africa by Eugene Skeef’s invitation to Tour  with ‘The Ngoma Project’ in 1995, Khadijatou was invited to return to work in  partnership in South Africa every year for over 10years creating, building,  co-Directing a Cultural Exchange between South Africa, UK and USA.  She  became Co-Partner of ‘Step Afrika!  International Cultural Festival’, a unique tri-continental cultural exchange, hosted by Soweto Dance  Theatre (SDT) in Soweto Township, Johannesburg and across the many Provinces of  South Africa.  She also developed herself in the budding poetry/music  scenes in Jo’burg.

From Johannesburg to  Wiltshire to Birmingham,  audience responses have been amazing! Her live band is tight, the visuals are  stunning and relevant, and the sound is receiving standing ovation and seeing  audience fully engage on her tracks, flying up onto their feet to dance to the  funkier tracks..  As recent as 2010 Khadijatou’s been invited for  interviews and to perform several times on radio, including BBC Radio  (Leicester).  She has also been interviewed on SABC fm (South African  Broadcasting Corporation), Radio 2000, Alex FM, Yfm etc., and interviewed with  live performance with her Drum on Soweto Television, DSTV (digital satellite  TV) broadcasted on repeat across Africa.

Back in 2005 Khadijatou wrote ‘Second Chance’  / K2’s Prayer – a spoken-word song for ‘The  Heliocentrics’ debut album ‘Out  There’ which was later signed to ‘Stones Throw  Records’, USA.  Released at the end of 2007, Khadijatou performed voice  and percussion with The Heliocentrics UK tour dates and across Europe in 2008 and performed and recorded new  material.  Khadijatou also works with other collaborators and Producers.  Her own Album called ‘Sex, Lies &  History’ was released in early 2011. 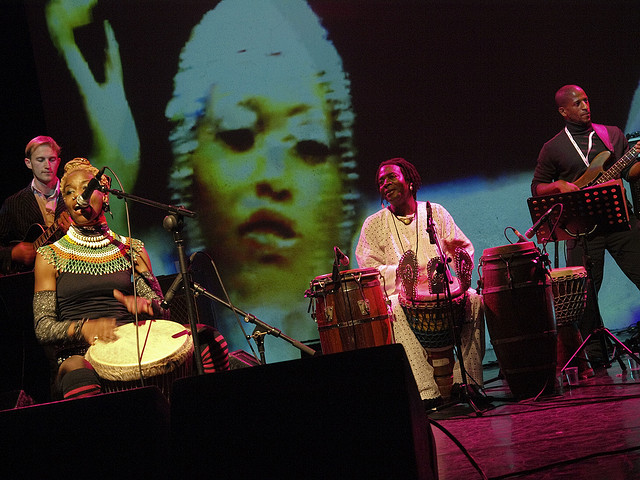