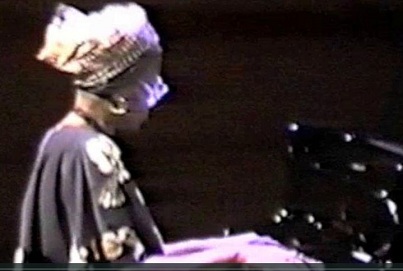 Joyce Ferdinand-Lalljie  was a child prodigy who began playing one of her mother’s piano pieces when she was three years old. She and her younger sister Mavis both became concert pianists and were known as the two Ferdinand girls. Joyce is accredited as being the first black woman, if not the first woman to play a full piano concerto.

In his article on radio in British Guiana for the 1951 Chronicle Christmas Annual, Albert E L Isaacs described Mrs Joyce Ferdinand- Laljee (later Joyce Ferdinand-Saunders) as one of the “Big Finds” of local radio (and stage) during 1951. Isaacs’ article stated that Joyce Ferdinand-Laljee’s genius was shared with the people of British Guiana through the radio programme Berbice Calling, produced by Olga Lopes-Seale on ZFY.

Joyce  was born in 1923 in New Amsterdam, Berbice. Her mother, Edith Ferdinand, was an important musical personality in New Amsterdam. She was a music teacher and organist at both St Patrick’s Anglican Church and Mission Chapel Congregational Church. Joyce’s other teacher in British Guiana was Mrs Ruby McGregor. It was under her tutelage that Ferdinand earned the Licentiate of the Royal Schools of Music (Piano Performing) in 1948. 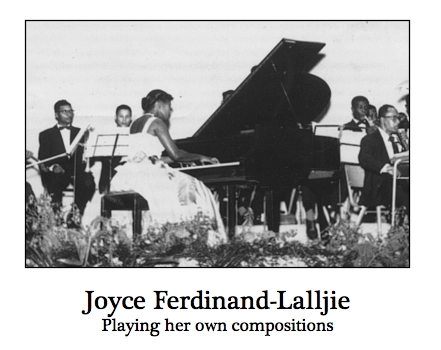 By 1951, Joyce was the toast of the nation. She dominated classical music and was celebrated for her performances on the British Council broadcasts.  As mentioned earlier, Isaacs described her as one of the “Big Finds,” and the Guiana Times voted her ‘Musician of the Year’ in 1951.

Charles Knights remembers her as the first Guyanese to perform a piano concerto with the British Guiana Philharmonic Orchestra. This was before the performance by Winifred Atwell, the celebrated Trinidadian pianist.

In 1946, Joyce married the Rev William Laljee. He was very supportive of her and encouraged her to continue her musical career. Joyce’s musical career took her to the United Kingdom, the United States, and back to Guyana.

Before leaving for the UK on a British Council scholarship in the early 1960s, Joyce relocated to Georgetown, where she established herself as an innovative teacher, performer and composer.

Between 1964 and 1976,Joyce taught music in Birmingham. According to the Snijders and Loncke, editors of One Hundred Years of Classical Music in the Guianas: Selected Pieces for Pianoforte, she returned to Guyana in 1976 to accept an appointment as a lecturer at the Cyril Potter Teachers’ Training College. Although her stay in Guyana was relatively short, she did engage herself in a number of activities that have since influenced her music creativity. Among the activities were renewing her contact with Guyanese folk music and her engagement with Broadcast to Schools.

In the late 1980s, Joyce made another trip to Guyana. The period following those visits has been marked by compositions celebrating the Guyanese landscape.

In her correspondence with the editors of One Hundred Years of Classical Music in the Guianas: Selected Pieces for Pianoforte, she explained, “The effect on me was profound, and thoughts of Guyana and the difference in life-style produced acute nostalgia. I was compelled to use the only means of expression at my disposal, and it was this feeling that impelled me into composing.”

Joyce has composed for viola, flute, voice, and pianoforte. Her Carousel for Flute was premiered by the Guyanese flautist Keith Waithe. Among her compositions for pianoforte are Odyssey of the Demerara River, Three O’Clock in Bourda, The Legend of Kai, Stabroek Blues, Water Lily Canal by Moonlight, and Janie Gal.

The work of Joyce Ferdinand-Laljee, now Ferdinand-Saunders, needs to be documented. She is without doubt a Guyanese creative hero.

The Legend of Kaie: http://roblalljie.bandcamp.com/track/the-legend-of-kaie