Too often people mistake Guyana for Ghana.  During  a recent trip to Florida, I was having a conversation with a colleague about the Mashramani celebrations in Guyana and she said to me “that’s in Africa right?”  I’ve also been asked quite a few times “what other language do you speak in Guyana?  That’s why I decided to put together this synopsis  to enlighten some folks on the difference between “Guyana” in South America and the African nation of “Ghana”.

The name ‘Guyana’ comes from an Amerindian word meaning “land of many waters” and it is known as the country of Six People- Africans, Amerindians, Chinese, East Indians, Europeans and Portugese. Guyana is notably famous for Kaieteur Falls, which is situated on the Potaro River, where that river falls off the Pakaraima Plateau.

The climate type of Guyana is tropical generally with hot and humid characteristics. Rains happen in the country two times in the year i.e. first from May to mid-August and second from mid-November to mid-January. It has an area of 214,969 sq km (83,000 sq mi) with a estimated population of 741,908 (July 2012).

East Indians (Indo-Guyanese) make up 43.5% of the population,  followed by people of African heritage (Afro-Guyanese) (30.2%). The third in number are those of mixed heritage (16.7%), while Aboriginals (Arawak, Wai Wai, Carib, Akawaio, Arecuna, Patamona, Wapixana, Macushi and Warao) are fourth making up close to 10% of the population. The smallest groups are European, including Portuguese (2%) and Chinese (1.8%).

Culturally Guyana is part of the Anglophone Caribbean. While it’s not an island, it nonetheless identifies more closely with the Caribbean; and its natives speak with a Caribbean English dialect.   Other Caribbean countries that are in close proximity to Guyana are Trinidad and Tobago, Grenada and Barbados.  The Caribbean Community (CARICOM), of which Guyana is a member, has its secretariat’s headquarters in Guyana’s capital, Georgetown. 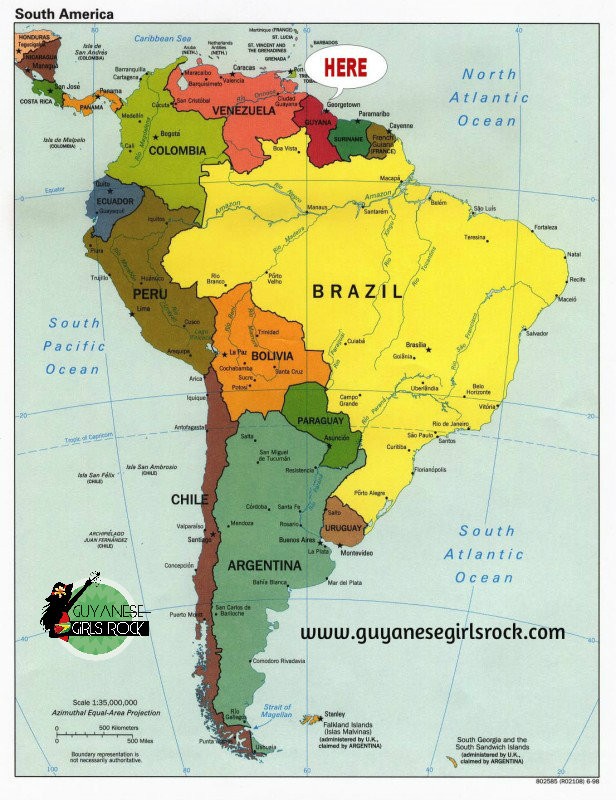