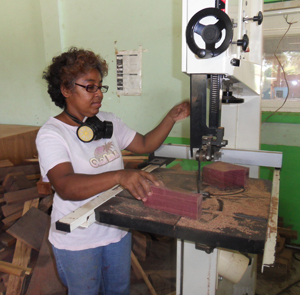 Irene Bacchus-Holder is a Guyana-based pyrographic artist (the art of burning design onto wood or leather). For more than a decade, she has been perfecting this art form in creating functional pieces for the home using Guyana’s natural woods. Irene got started in this craft with the encouragement of my brother who sent her a wood burning pen with interchangeable tips.  She began by offering gifts made of wood from Guyana’s rainforest to several friends. Irene stated that she  always wanted to do something to establish herself  and become financially independent.” That ‘something’, turned out to be pyrography: purchasing blocks of wood- cutting them, shaping, sanding and lacquering them, and finally hand-painting them. The end products would be beautiful jewel boxes, bowls, platters, rolling pins, and table lamps, with Irene’s unique hand painting embellishing them.Irene’s decorative and  functional handicraft are based on her own original designs, and are made of rare — but not endangered — native wood species.  Here exquisite pieces have been exhibited and sold both at home and abroad and are often given as corporate gifts. In 2007, the government of Guyana  offered some of Irene’ pieces as gifts to delegates attending an international summit in Rio de Janeiro.   For her outstanding work, Irene was nominated as one of the ten finalists in the inaugural UNCTAD/EMPRETEC International Women in Business Award in 2008.

Through recent funding she received from the  “Matching Grant Initiative” Irene  was able to participate in trade shows in Germany, France and California. She noted that in California, all of her items sold out on the very first day of the exhibition.  Irene has also exhibited her pieces at international trade shows in Barbados, England, Mauritius, Venezuela and a number of other Caribbean countries, including Cuba and Curacao.

Pen holder and pen made from Dukabaliballi

In a 2011 interview with Guyana Times Sunday Magazine, Irene said, “Guyana has some of the most beautiful wood species in the world, and logging companies are using just a few for commercial purposes – about 70 of over 1000 species. In their quest to harvest those few species, a lot of wastage occurs. Since the species do not grow in stands, paths have to be cleared to individual trees, and species which are not needed are felled and left to rot. In addition to using the plain woods to do pyrography, I utilize Guyana’s beautiful wood species to create the decorative and functional items displayed here. Items may be crafted to suit your special needs.” Irene uses the discarded species for her work and also make arrangements with loggers to be supplied with beautiful wood species such as Dukaliballi, Snakewood, Itikiboraballi and Marblewood, to name a few. The natural flaws in the wood are repaired and highlighted in the product to show the naturalness of wood. This also adds a unique quality to the item. She approached local stores with her art, and was rewarded with several orders.  Over the years she has sold her unique array of wooden items to places such as Guyana , and other Georgetown businesses. 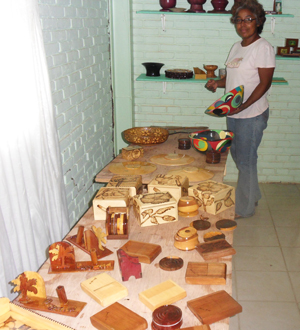 Irene displays some of her creations

Irene initially opened her business, Amazon Authentics (formerly Irene’s Creative Craft) in her hometown of Linden, but is now located in Georgetown. Each item produced by Amazon Authentics are individually hand-finished and is of high quality. The business operates with awareness and care for the environment and produces beautiful wooden vases, candlesticks and a wide variety of decorative bowls, gift items for the office such as pens, a variety of business card boxes, paperweights, pen and letter holders; kitchen and table wares such as trays, cutting boards, rolling pins, coasters, cups and plates. Amazon Authentics also carries women’s accessories including wooden hair ornaments and necklaces. Apart from her own pieces, Irene says that she also allows other artists to showcase and sell their pieces at her store.

In addition to making hand painted gifts and novelty items, Irene is also a talented seamstress, and does batik and cake decorating. She points out that before delving into pyrography, she used to sew and hand-paint clothes, which she sold to a boutique owner in Georgetown. Irene said that she chose to establish a location in Georgetown as there was hardly anywhere where one could find authentic and beautiful artwork which featured Guyana’a beautiful woods. Her future goal is to secure an overseas market for her beautiful rolling pins.

So remember to stop by Amazon Authentic Art Gallery (located at 73 Robb Street Lacytown) the next time you visit Guyana and pick up a few pieces of Irene’s amazing wooden creations. You may also call Irene at 444–6161, 444–6637, or 670–5162; or email her at amazonauthentics@gmail.com.