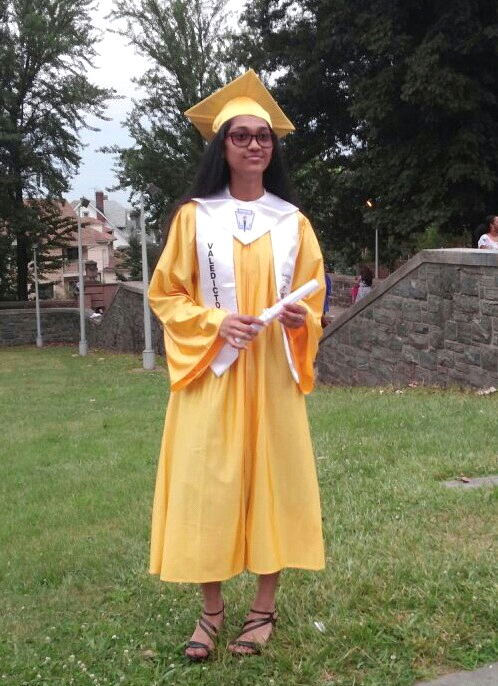 When she entered her guidance counselor’s office earlier this year, it was not a big revelation. Bibi Sulaman, a senior at Jamaica Gateway to the Sciences High School, had met with her counselor to verify her credits and classes before graduating this June. Casually, her counselor revealed that she was valedictorian of her class of around 150 students. “It wasn’t a surprise,” said Bibi. “[Being valedictorian] wasn’t my goal. I just tried to do my best. That’s the mindset that I went into high school with.”

Long before the 17-year-old had entered the doors of her high school, she had been valedictorian at another school: Cotton Tree Primary School in Berbice, Guyana. There, one of the teachers who had an impact on her was Miss Ravina Gannie. “She was the best teacher I had there. She was very creative and really tried to get the students involved in the work she was doing.”

Bibi’s sister, Ashmeena Sulaman, her senior by two years, said that it was good that their grandparents, Jammila and Nizamoodeen Shairulla, and mother, Rahima Shairulla, also encouraged them to excel in school at a young age. “That’s how it started,” said Bibi. “They’re all about ‘take your education.’ That is a saying everyday. We were taking lessons in like, nursery school,” she said laughing. While assertive, their mother and grandparents were also “very encouraging.”

In October 2010, Bibi, Ashmeena, their mother and grandfather were living in D’Edward village in Berbice, separated from their grandmother in New York. After five years, they finally boarded a plane only to be evacuated back off due to a smoke problem. After spending a “tiring” night at the Cheddi Jagan International Airport, they boarded a plane to New York the next day.

For both sisters, the transitions to New York schools though, were not what they were expecting. “The kids here are so different. The things they would do and how much freedom they had in the classroom really surprised me,” she said. While her sister, Ashmeena started her sophomore year of high school, Bibi entered eighth grade in middle school. “I really didn’t have much of a group of friends, so, I was very much alone during that period. But, I made it out alive,” she said with a laugh.

After a few months at Middle School 137, Bibi entered an honors class. Another achievement soon followed when she got a 99% score on the Algebra Regents Exam. After starting in the middle of the year, she remembered taking after school lessons to get the grade. “It was amazing,” she said. “I worked so hard on that…so it was real accomplishment for me.”

The next fall she entered high school, as a self-described introvert who did not speak to many people. “I would go to school, do my work, and then come home,” she said. Model UN (United Nations) was one club she took part in her freshman year that allowed her to present a human rights argument with her peers to an international audience. “That [club] tried to get me out of my shell,” she said, making her meet new people.

The next school year Bibi and some other “introverted” students formed the school newsletter. In that club, Bibi wrote articles, did layout, and drew cartoons. Being part of that extra-curricular activity changed her from being “a lone ranger” to having a connection to the school. “It was so scary at first, we’d do partnering where we’d go with each other to do the interviews,” she said. “It was a growth experience. I realized that the only way to really grow is through trying things that scare you. You become better as a result.”

Bibi is also a band clarinet player, book club and student government member, and tutor. But how did she manage to achieve top grades with such a schedule? “I used chocolate for a while,” she said speaking about a study method where one places candy or food on their textbook pages (for Bibi, U.S. History) to motivate them to read. At night she would tire herself out with history and math, and then go to sleep for a couple hours. After waking up, she would do English homework, finding mornings best for doing her most creative work.

But, studying was not common for Bibi until the 11th grade when she took three Advanced Placement (AP) classes: AP Calculus, AP English, and AP U.S. History. “That was insanely difficult for me. Suddenly I had to read textbooks and remember stuff every night for U.S. History.” At first, her test grades were 70s and 80s. She learned how to study gradually, by using the ‘chocolate method,’ outlines, and mnemonic devices. “I just struggled through the whole thing because I still don’t know how I got a four on the AP U.S. History exam.”

Besides chocolate, study groups also helped her. After she got some students together, they went to the library after school to study. While they studied individually, having one another there kept them all in check, Bibi said, so they didn’t wander off to the computer side of the library.

But studying did not always have that accountability. “I had to read textbooks at home. That took up so much of my time,” she added. “I barely slept that year. It was so terrible.” But, that year was also a great learning experience for her, she said, “I honestly feel like the difficulty of that year helped me to grow into the person I am now.”

Another method that helped her learn better was by tutoring fellow students. She started tutoring informally around the classroom in math. Later, she earned service credit after school for tutoring in math and science. “It’s a nice experience,” she said. “I learn better through teaching it to someone else.”

For motivation, “I’d go to YouTube and reward myself with a video, usually about some inspirational person on TEDx [Technology Entertainment Design],” said Bibi. “But, also in the more grand view of things I want to do better than what my family has already done. So you kind of have to tell yourself that doing this will get you there- and do it.”

To experience potential careers, Bibi took summer internships. In the tenth grade she wanted to be a doctor. After a four week medical pipeline program at Hofstra University, Bibi realized she was not the person for the job. “You have to interact with patients all the time. I’m more into the research part of it.” This fascination led her to Queens College the next summer where she studied Siamese fighting fish with a biology professor there. “I aspire to be a neuroscientist someday in the far future,” she said, adding that there is so much studying involved. “But, I think it fits because my whole life I’ve been about academia and studying and learning things.”

“I love to binge-watch on Netflix TV shows because during the school week you don’t really have time for television or anything recreational,” she said. Another love of hers is watching science-related YouTube channels like Vsauce, SciFri, and Veritasium. “They’re just really awesome people who are trying to communicate complex scientific stuff to everyday people. I want to get involved in that,” she said, “To bridge the gap between these scientists in lab coats somewhere off in academia and people who are going about their daily lives without really understanding the beauty of science.”

One of her goals for college is to engage in more research to determine if she really enjoys it. Another is to push herself to do things that make her feel uncomfortable, like talking to different people and becoming a leader.

Bibi was accepted to Colgate University, Vassar College, Macaulay Honors at City College, Skidmore College, and the University of Rochester and made the waitlist at Cornell University. She plans to attend Vassar College in the fall and major in Neuroscience and Behavior.

One program “instrumental” in her applications to private colleges was Bottom Line, which assisted her with the help of a personal counselor.

While looking forward to college in the fall, Bibi is also both scared and excited. “I feel it’s another phase of life, and it’s going to be scary at first.”

“I want to use these four years in college to figure out how I’m going to contribute to the world, because I haven’t been doing that too much. Like what do you do with your life? How do you make it worth it? Maybe that’s expecting too much from college,” she said with a laugh.