How adorable is this little Miss Adaeze Fredericks – rocking the Guyana‬ Flag colors with such pride.

The Golden Arrowhead, Guyana’s National Flag has FIVE symbolic colors — GREEN represents the agricultural and forested nature of Guyana, WHITE symbolizes the rivers and water potential of the country, a GOLDEN arrow represents Guyana’s mineral wealth, BLACK portrays the endurance that will sustain the forward thrust of the Guyanese people and RED represents the zeal and dynamic nature of nation-building which lies before the young and independent Guyana. 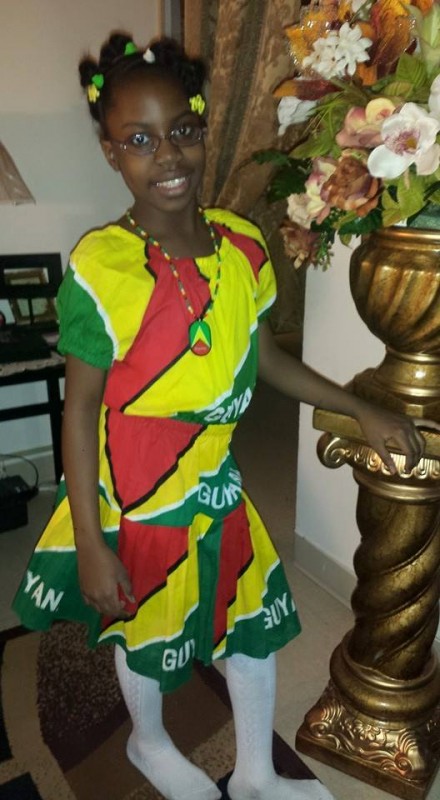 Guyana, officially the Co-operative Republic of Guyana, is a sovereign state on the Caribbean coast of South America. Although Guyana is part of the Anglophone Caribbean, it is one of the few Caribbean countries that are part of South America. The Caribbean Community (CARICOM), of which Guyana is a member, has its secretariat’s headquarters in Guyana’s capital, Georgetown. Guyana was originally colonised by the Netherlands. Later, it became a British colony, known as British Guiana, and remained so for over 200 years until it achieved independence on 26 May 1966 from the United Kingdom. On 23 February 1970, Guyana officially became a republic. In 2008, the country joined the Union of South American Nations as a founding member.