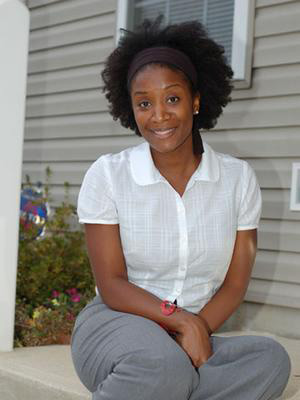 A Guyanese born scientist, Dr. Paulianda Jones has been noted for her neuro-pharmacological research, focusing on the discovery of possible treatments for Parkinson’s Disease and anxiety disorders. A post-doctoral research fellow at Vanderbilt School of Medicine, she is regarded as a brilliant chemist.

Paulianda was born to Andrew Griffith and Paulette Griffith (nee Seaton), both of Georgetown and she resided in both Georgetown and Lethem before migrating to the US in the mid 1980s.  She is the oldest of three siblings-Amanda and Aaron. After a brief stay in Brooklyn, NY, she and her family migrated to Northern Virginia where she attended elementary and high school. She graduated with her BS in Chemistry from Washington and Lee University (Lexington, VA) in 1997 and her PhD in Chemistry from the University of Virginia (Charlottesville) in 2006.

In 2007 Paulianda received her doctorate in chemistry from the University of Virginia.  That same year she was named to Black Enterprise Magazine’s “2007 HOT LIST: America’s Most Powerful Players Under 40.”  This list  recognizes “African-Americans who have made groundbreaking contributions in the areas of business, law, finance, medicine, entertainment, politics, technology, the arts and education.”

According to Paulianda’s husband,  Alwin Jones,  her interdisciplinary training puts her on the cutting edge of research: she is a chemist with expertise in brain slice electrophysiology using techniques to understanding neuronal activity in both diseased and normal states.”  Paulianda has also been awarded several fellowships for her graduate work on epilepsy, including “the nationally competitive UNCF/Merck Science Graduate Dissertation Fellowship”.  Paulinda plans to work actively to increase the number of women who decide to pursue a science career both in the US and Guyana..