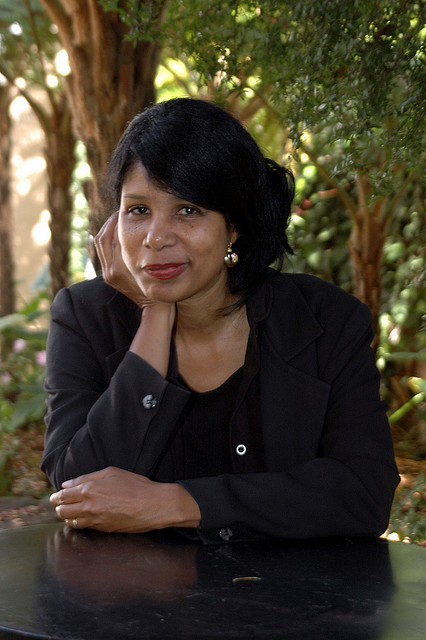 Dr. Karen Ann King-Aribisala is a Guyanese-born novelist and short story writer who was raised in Nigeria. She is the daughter of the late Dr Kenneth, the former Minister of Economic Development, and Guyana’s Ambassador to the European Union, and  Joyce Miller King.

Dr. King-Aribisala  left Guyana as a young child, moving with her parents to Nigeria.   She received an international education in Guyana, Barbados, Italy and at the London Academy for the Dramatic Arts in England. It was while studying in Italy as a teenager that she met her Nigerian husband.

Dr. King-Aribisala’s first book of short stories “Our Wife and Other Stories (1991)” won the Commonwealth Writer’s Prize for Best First Book, Africa Region. Her most popular work to date,  The Hangman’s Game also won Commonwealth Writer’s Prize for Best Book in 2008.  The Hangman’s Game serves parallels in the slavery imposed by General Sani Abacha’s military regime in 1980s Nigeria and the conditions that led to the Demerara Slave Revolt in 1823 Guyana.  She has published several short stories in literary journals including Wasafiri, Presence Africaine, The Griot and Bim. Another one of her novels is “Kicking Tongues”, published in 1988, is a story which takes place in Nigeria where the abuse of power assumes many forms.

The award winning writer has received recognition for her work from many institutions such as the Ford Foundation, the Commonwealth Foundation  and the British Council. She has received grants and fellowships such as the James Mitchener West Indian Writer’s scholarship and fellowship for Creative Writing at the University of Miami, a Ford Foundation Grant, British Council Grants, and a grant from the Goethe Institute. Dr. King-Aribisala has represented Nigeria as a poet in Rome and in Italy at poetry Festival, ‘ROMAPOESIA’. She has also been awarded artist’s residencies at the prestigious MacDowell Colony and Djerrassi Foundation in the U.S.; a residency at the Camargo Foundation in France where she performed her poetry at the inauguration of the Mayor of Cassiss. (Source: The Nation; Guyana Cultural Association of New York April 2012 Newsletter) 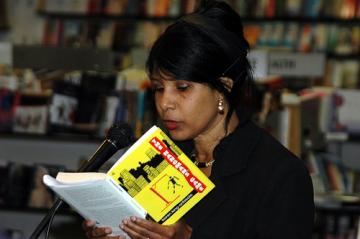 Reading an excerpt from her book “The Hangman Game”

Dr. King-Aribisala credits her father for steering her towards a career in writing. “My father was very influential in determining the course that my life has taken in the sense that ever since I was about eight, when I first began writing creatively, I would read the stories that I had written to him and he would comment on them and encourage me. As I grew up, we came to live in Nigeria” she shared.  “That was about the time of the Nigerian Civil War. We lived in Ibadan and I attended the International School , Ibadan. During the holidays my father would call me to learn particular parts of the Bible, particular books of poems by heart. We discussed poems. And all of these helped to encourage me to write. But I think I would have written anyway.

Dr. King-Aribisala is a Professor of English at the University of Lagos in Nigeria, where she currently lives with her husband..