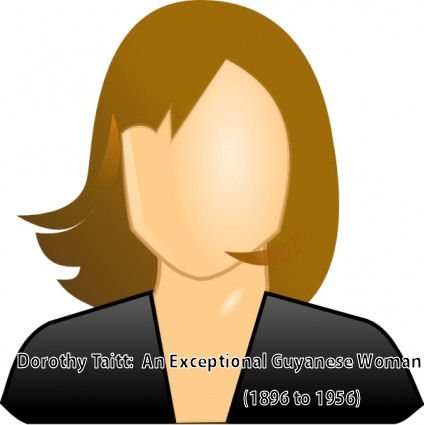 Mrs Dorothy Taitt  (nee Pendelton – 1896 to 1956) is remembered as a strong, competitive woman who exerted considerable influence on music in Georgetown during her lifetime. She was a critically acclaimed contralto who was in demand for concerts. She taught singing at Bishop’s High School, served as mentor to many singers such as Rupert Hunte, who became a tenor of note in the United Kingdom. She was a member of the Bedford Methodist Choir. She was the founder of the B G Philharmonic Society, which had an orchestra and a mixed-voice choir.

The B G Philharmonic Orchestra’s annual concert at the Georgetown Town Hall was a highlight of the social calendar. It was a very formal affair. The orchestra rehearsed extensively for that and the many other concerts held in during their seasons.

The B G Philharmonic Orchestra also accompanied visiting artists such as the talented Guyanese conductor Rudolph Dunbar and Trinidadian pianist Winifred Atwell. Members of the orchestra were recognized as professionals and were paid for each performance.

Dorothy Taitt was a founder member of the B G Union of Cultural Clubs. She was a very important figure in colour and class-dominated pre-independence Guyana. The management committee of the B G Philharmonic Society included some of the most influential members of the colonial establishment in British Guiana – Archbishop of the West Indies Alan John Knight, Mr Raatgaver, and Sir Frank McDavid.

Contemporary analysis of Dorothy Taitt’s work suggests that she was subversive in the positive sense, parlaying her influence to empower Guyanese of all races, colours, and classes. She is said to have played a role in the allocation of British Council scholarships.

Mrs Taitt is remembered for ensuring that the resources generated by the society were used to encourage participation in classical music by all members of society. She is remembered for being unselfish in promoting Guyanese talent. One commentator has suggested that she played an important role in the development of accomplished Guyanese musicians such as the Terrills, the Rohlehrs, and the Bumburys.

Dorthy Taitt was able to take disappointments in stride. She saw the B G Philharmonic Choir defeated by Ruby McGregor’s NAMS (New Amsterdam) Choir at a music festival. This event had cultural significance in that the Georgetown ‘elite’ were defeated by ‘country people.’

Dorothy Taitt’s leadership in the British Guiana classical musical scene was not inherited. She had talent and was allowed to develop it. Her musical abilities were encouraged by the legendary Guyanese educator, Dan Sharples.

She was also good at spotting and encouraging talent. This was honed during her days as a programme host on early Guyanese radio. She was known as ‘Aunt Tabita’ on ZFY, one of Guyana’s earliest radio stations. The Aunt Tabita Show has been described as a kind of amateur hour show featuring verse speaking, singing, and other musical performance.

Dorothy Taitt also contributed to the political life of Georgetown. She served as Town Councillor and it is reported that she was responsible for the introduction of traffic lights in Georgetown.

Dorothy Taitt’s effectiveness was also a function of the support she received from her husband. Dr Jabez Taitt was one of those Barbadians who immigrated to British Guiana and made a significant contribution to Guyanese life. He served with distinction as a Government Medical Officer (GMO) in the Corentyne and Georgetown. Dr Taitt and his wife travelled extensively and both experienced the scourge of racial discrimination during travels to the United States in the late 1930s. Such were those times. Those experiences no doubt informed life in the Taitt household. The Woodbine Club was created to instil confidence and the use of the creative arts for positive expression and human dignity. As Michael Gilkes tells us, the Taitt children, their cousins and their friends knew: Sunlight splintered East Street canal. We lay silent, sun-struck, pin hooks baited with bread, angling for sunfish.

There is so much more to Dorothy Taitt and the times she lived in. She is remembered fondly. One of her proteges remembers her as ‘Ma’ Taitt, and in a recent interview concluded, “We should never forget Dorothy Taitt… She must never be left out of our nation’s musical history.”

Dorothy Taitt is a Guyanese cultural hero. Her legacy lives on through the works of Marina Taitt, the publisher of the on-line journal CARIBARTS and the Dorothy Taitt Foundation. For further information on CARIBARTS visit www. caribarts.org..