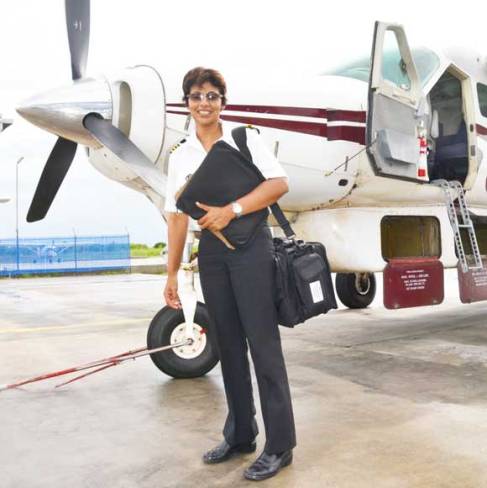 Captain Feriel Ally of the local Air Services Limited (ASL) recently created history on July 12, 2012 when she became the  first female in Guyana certified to operate a grand caravan aircraft.  The daughter of Guyana’s aviation pioneer Yacoob Mazaharally, Captain Ally began her aviation career in 1988 when she trained for, and obtained, her private pilot’s licence in the USA.

Following her training, she returned to Guyana and built her hours flying the Cessna 172 and 206, ferrying supplies into the remote and challenging airstrips of the timber concessions owned by A. Mazaharally and Sons Limited, the parent company of ASL.  Captain Ally qualified on the Islander twin-engine aircraft, the aircraft of choice for tourism and corporate sectors; and on returning home became a fast favourite with corporate executives, who would request that she be their pilot.

Captain Ally has become a well-known shuttle captain in what was once a male-dominated aviation industry, tirelessly carrying on the ASL tradition of commitment to community development, and unbroken service to the residents of Region 8. “I love the challenge of flying aircraft in Guyana’s hinterland; I just love bush flying,” she said. The Cessna Grand Caravan aircraft she is now qualified to fly is a 13-seater which is in demand because of its greater speed, relative silence, and superior seating and cargo-carrying capacity, besides its fuel efficiency. It has far more powerful engines than the lightweight piston engines of the Cessna 172 and 206, generally regarded as the workhorses within the local aviation industry. “It was necessary for me to train for this aircraft, since its engine is so much more powerful, and it requires a different approach to start-up and take off and other aspects of flying than the piston-powered aircraft,” Captain Ally shared. Her training included a programme in a flight simulator in Miami in the US.  She then had to complete at home 75 hours of turboprop flying time with an instructor, to satisfy insurance requirements, before receiving approval to take off on her own.

Captain Ally is also fully qualified in Aviation Management and worked as Deputy Manager of Airport Operations at Cheddi Jagan International Airport followed by many years in the Guyana Civil Aviation Authority (GCAA), the industry’s regulatory body, as an Aviation Inspector.When asked if she will move on from turboprop to the even more powerful turbojet, Captain Ally responded “I doubt whether,” she said last week. “I am a Guyanese, I am a patriot, and I love what I do for the hinterland communities in Guyana. Turbojet?  Not likely.”