ABOUT  THE BOOK:  Told in the voice of a girl as she moves from childhood into adolescence, Buxton Spice is the story the town of Tamarind Grove: its eccentric families, its sweeping joys, and its sudden tragedies. The novel brings to life 1970s Guyana-a world at a cultural and political crossroads-and perfectly captures a child’s keen observations, sense of wonder, and the growing complexity of consciousness that marks the passage from innocence to experience. 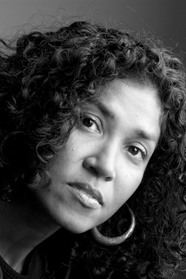 Oonya Kempadoo was born in England to Guyanese parents. She has lived in Europe and on various islands in the Caribbean. Her first novel, Buxton Spice, was published in 1998 to great acclaim. Her second novel, Tide Running, won the prestigious Casa de las Americas Literary Prize for best English or Creole novel. Kempadoo lives in St. George’s, Grenada.
Her first novel, Buxton Spice, a semi-autobiographical rural coming-of-age story, was published 1998. The New York Times described it as “superb, and superbly written”. Her second book, Tide Running (Picador, 2001), set in Plymouth, Tobago, is the story of young brothers Cliff and Ossie. Tide Running won the Casa de las Americas Literary Prize for best English or Creole novel. Both of these books were nominated for International IMPAC Dublin Literary Awards, the first in 2000 and the second in 2003. She was named a Great Talent for the Twenty-First Century by the Orange Prize judges and is a winner of the Casa de las Américas Prize.
Her third novel All Decent Animals (Farrar, Straus and Giroux, 2013) was recommended on Oprah’s 2013 Summer Reading List by Karen Russell, who said: “How am I only now finding out about this writer? It’s as if she’s inventing her own language, which is incantatory, dense, and lush. The authority and blood pulse of it seduced me