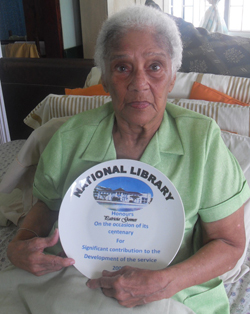 Mrs. Gomes displays the token of appreciation she received from the National Library during its centenary celebrations.

Born in Guyana in January 1923,  Patricia Gomes has purposefully dedicated more than half of her life to theatre and along the way has been quite accomplished in other areas. She has, as they say, “done it all” – from stage plays to storytelling to dancing her life away, much to the enjoyment of the audiences she thrilled.  In 2010, Ms. Gomes was named by “Special Person”  by Kaieteur News, and in an interview with Jenelle Carter she discussed her childhood and impressive career

At the tender age of 2 and a half, she was adopted by her mother’s best friend, Marion Mc Murdock. She was the youngest of three siblings – two sisters and a brother. She started her years of formal education at a preparatory school at Regent and Oronoque Streets which then moved to Forshaw Street, Queenstown, where she was taught by Rosamund Nicholas and Pear Walcott. She next went to Christ Church School where she received the foundation she needed in Arithmetic and English and Writing, and later attended Modern High School. Mrs. Gomes recounted that at that institution she was fortunate to be taught the skills of drawing by none other than the renowned E.R. Burrowes. As proof of what that experience has meant to her, she now has what she proudly describes as three beautiful drawings of her own. These, of course, are cherished possessions. She also recalls being taught shorthand and typing which she later used to her advantage to obtain her first job.

While searching for that first job, a very prominent and respected woman in her community, Mrs. Dorothy Taitt, approached her guardians asking them to send her on Friday nights to the Woodbine House Club in Cummingsburg. It was there where Mrs. Gomes or ‘Aunty Pat as she is fondly referred to, developed the art of public speaking, elocution and “how to move the best vote of thanks” as she put it. At the same club she was also tutored in singing, ballet and ballroom dancing, all of which she held close to her heart as they benefitted her immensely, both on and off stage. Being able to attend the club was one of the things she had a passion for, as she saw every session as a step closer to stardom. She recalls doing all she could to “get every step, every move… all together every choreography right”. She stopped at nothing to ensure it was done to the letter, even if it took her an entire night of practicing. “I would say I was fortunate to be a part of that club as I was being taught and exposed to the more refined things in life.”‘Aunty Pat’ remembers meeting “a fine gentleman”, who took the time to ensure that she and others who gathered at the club for tutoring were perfect in their elocution skills, which she admits, assisted her tremendously in her acting career.

Mrs. Gomes also recalled that while she was preparing to enter the world of employment she had abundant spare time, and it was during that period that she found herself reading out aloud as she honed her public speaking skills. Such dedication enabled her to unearth yet another talent – the ability to be an efficient perfect storyteller. “Only the good Lord knows where I got that gift from, that I could have made my storytelling be so effective.”

As time went by, with all that she had acquired academically and otherwise, ‘Aunty Pat’ secured a job at the Bureau of Public Information (later renamed the Government Information Service), through Mr. H.R. Yearwood, who was at the time the entity’s Managing Director. While working there, she said that she could not keep her eyes off the building next door – the British Council. She vowed to herself that one day she would be employed at the said entity. “I became friends with a woman, Phyllis Shepherd, who was working there… and quite often I would peek through my window and ask her if she could assist me in getting a job… I told her the instant a vacancy came up let me know.”She said she tried to stay as focused as possible on her job, but couldn’t help being distracted by the sounds emanating from the building next door.

Finally, yet another one of her prayers was answered, as she gained employment with the British Council. She said that informing her previous employers that she was leaving was quite difficult, as she was appreciated by all whom she had worked with. “They didn’t want me to leave, but for some reason I had my sight set on working with the British Council because in my mind, I knew working at the British Council was much more than just gaining the experience of working.” One of the highly beneficial aspects of working at the Council, she pointed out, was being able to access innumerable priceless records from the library. “Although I paid keen attention to my duties while working there, I developed a love for classical music and its composition. The British Council’s library was a treasure trove in this regard.”

According to Jenelle,  ‘Aunty Pat’ didn’t remember exactly how long she stayed with the British Council, but she described her time there as “many fruitful years”. And it was while at the British Council that she met her husband who was at the time working at Esso. The two met at a party and ‘hit it off’ as she puts it. Before long they got married and their union produced three children – David, Christopher and Sharon. She gave kudos to her husband who dedicated most of his time tending to their children while she was out entertaining audiences at the Theatre Guild and at the National Cultural Centre. 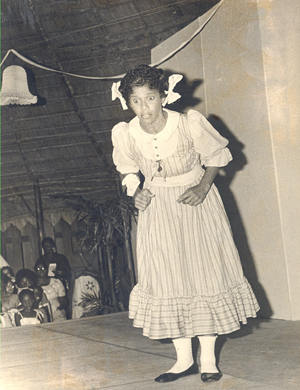 During her stellar forty-year acting career, Mrs. Gomes has appeared in more than 40 plays. Some of these include The Jero Plays by Wole Soyinka, which was performed in July of 1977. It tells the story of political satire in Nigeria and other parts of Africa. Other plays included ‘Journey to Freedom, ‘A Raisin in the Sun’, ‘The Teahouse of the August Moon’, ‘On the Brink’, ‘Brink top’, ‘Fall of Chief’, ‘Kind lady’, and ‘Miriamy’. Many who worked with Mrs. Gomes in these plays recalled her being an extremely disciplined performer in every one of her roles. While her acting career was at its peak, she still found the time to visit the National Library every Saturday morning to gather children there for one hour of storytelling.

However, only being able to reach those who gathered at the National Library was not enough for this special individual, she moved on to having her stories recorded and aired on Radio Demerara so that they could reach those both near and far. The octogenarian is obviously not as mobile as she used to be, and is in fact, mostly confined to her bed. But this does not affect her ability to provide sound advice to person is, “Whether you are in a play or not, whatever it is that you do, give yourself something to memorize or practice every day…remember that the mind, like the rest of the body, needs to be exercised.”

For her years of dedication to theatre, Mrs. Gomes was nominated twice for National Awards, but was never the recipient of one.She was nevertheless rewarded with a plaque for her contribution toward the development of services by the National Library during its centenary celebrations.