Christine Sukhram is the only leading lady in Guyana when it comes to golf.  She is currently the reigning Guyana Women’s Open Champion. In 2004, at the age of 15, Christine recorded her second international junior title when she won the Pepsi Junior Golf Tournament in Barbados. After proving herself a winner, Christine was selected for the Soca Soft Drinks sponsorship program for talented young Guyanese. Among her most memorable victories at that tender age was the Best Ladies Competition, the Guyana Open (Best Net), the Citizens Bank and the Universal Airlines tournaments.  Over the years, Christine has competed and won golf tournaments in Barbados, Trinidad and Tobago and Canada. 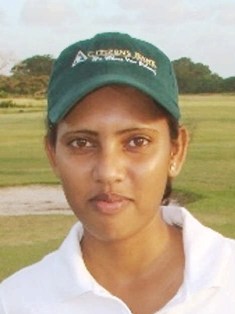 In a 2011 interview with Guyana Times Sunday Magazine , the motivated golfer said her father, who is now deceased, was instrumental in her golf career, teaching her the techniques of the game as he was her personal coach. “I was born in Guyana but my parents migrated to Grenada for about two years until I was about six. My father was a golf coach there and he would have lessons for persons, and I would join in after school. At age six I started playing, just learning the art of the game. I went with him as he would teach others, and from then on I picked up the game from there,” she recalled.

Christine encourages youths, especially females to get involved in the sport.  She stated that although it may seem a man’s game, it is not, because in other countries there are women who are dominating the game as champions more than the men.  She is inspired by  international golf champion Tiger Woods and follows publications and collects posters of him to keep herself adept at the game. Christine works with the Lusignan golf club to get more females involved in the game of golf.  She coaches a Summer program where young girls are taught about the game of golf .The champion female golfer intends to remain devoted to the sport and to extend her record of international success. “I have to stay focused and follow the rules and take one hole at a time. Every hole is further apart so the swing is important. A good game and winning come with a lot of practice. I will never forget what my father taught me. He told me to never stop at where I am but keep elevating myself, and if I don’t do well I should keep trying and give it my best.” She added that winning does not come easily as it requires dedication and much practice.

Earlier this month Christine won the female title for a record sixth time in a row at the 2012 Digicel Open Golf Classic at the Lusignan Golf Course taking home the Overall Best Net for Ladies Awards.